State to Joint Commission: You recommended accreditation of Rawson-Neal on one survey but not the other

After visiting the embattled Rawson-Neal psychiatric facility in May and June, the Joint Commission recommended accreditation for the troubled facility, according to a letter from state officials to the non-profit outfit.

The missive, which I have obtained and is attached to this post, indicates that this week's preliminary denial was part of another type of survey -- part of a two-track process the hospital has been undergoing. One track arose out of the patient-dumping scandal; the other is a regular three-year evaluation.

But a copy of the report from the Joint Commission, also attached here, indicates the preliminary denial occurred because of "the hospital placing patients at risk for a serious adverse outcome due to significant and pervasive patterns, trends, and/or repeat findings." And a spokeswoman for the Joint Commission, Elizabeth Eaken Zhani, declined to comment on the state's version of events, saying correspondence between the state and the commission is confidential.

►On May 2-3, the Joint Commission folks visited Rawson-Neal as part of what is known as a "for cause complaint survey," which apparently arose out of the patient-dumping controversy. It is that survey that has now caused the recommendation for denial and the state's decision not to appeal (because "only information that would be considered during an appeal of the PDA (Preliminary Denial of Accreditation)  is the information SNAHMS provided prior to the date the PDA was recommended. All of the improvements that SNAMHS personnel have made and all the new processes for oversight and sustained compliance will also not be considered").

You can see from the Joint Commission report that two dozen problems were found on that visit, many of them quite serious and directly related to the patient-dumping scandal. What a gold mine for the ACLU in its lawsuit against the state.

The Joint Commission report attached here shows three-dozen "out of compliance" standards, many of them serious, so I am not sure about what happened next, according to the state's letter.

Strange, eh? Or perhaps the state had fixed everything by then?

Did I mention this process was odd?

After teleconferences in recent days with the Joint Commission, however, the state learned, according to Szklany's letter, that the facility was "on two tracks" and that  "the Accreditation Committee will only consider the worst decision track (i.e., the May 2-3, 2013 "'or cause complaint survey'). Therefore, the accreditation decision from the "'or cause survey' trumps the accreditation decision from the 'full survey', even though the subsequent TJC surveys found SNAMHS to have completed all needed improvements and recommended accreditation."

The silver lining for the state: "However, it is our understanding that should SNAMHS reapply for accreditation, SNAMHS could do so immediately, and that during a reapplication for accreditation process, the improvements and progress made can be considered by the Accreditation Committee."

The damage, of course, is done, inlcuding this banner headline in the "newspaper" this morning: 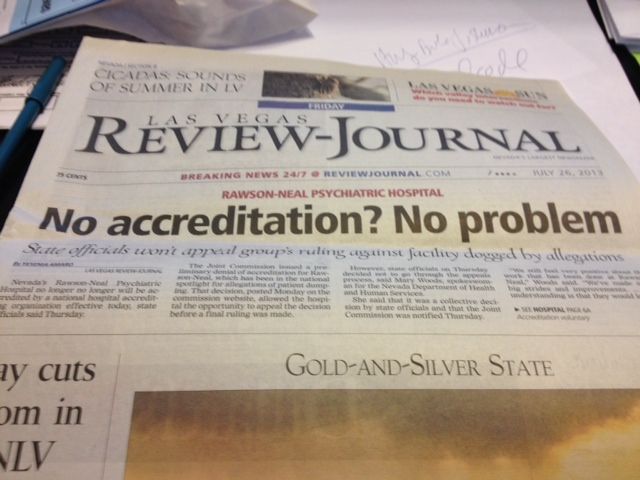 I am sure a new accreditation application is already in the works.