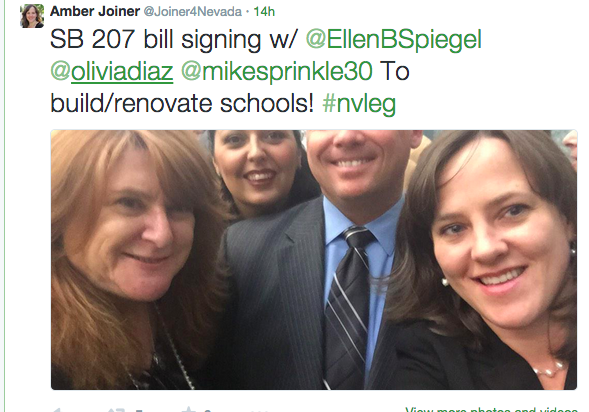 signing ceremony for the school construction bill that she took a selfie.

The picture, which she tweeted (see right), included her Democratic colleagues, Ellen Spiegel, Mike Sprinkle and Olivia Diaz. Two dozen lawmakers attended the ceremony hastily thrown together Wednesday after Senate Bill 207 passed the Assembly with all Democrats and 10 Republicans voting for the measure.

But some of those Democrats, including Joiner and Spiegel, has indicated just a week ago that they opposed the bill, which would allow districts to automatically roll over bonds for building facilities for as long as 10 years. As the parties jockeyed to take credit -- the Democrats saying they forced the GOP to do a standalone bill without a prevailing wage exemption and the Republicans crowing about it passing under GOP leadership -- Joiner, Spiegel and Richard Carrillo are on record essentially opposing what they celebrated Wednesday

At an Assembly Government Affairs hearing on Feb. 26, the trio of Democrats weighed in on the still-pending measure that ties together school construction and prevailing wage. But their concerns were not about the wage part but about the automatic rollover, which they said subverted the will of the voters, echoing concerns by GOP lawmakers who voted against the standalone bill and an issue that advocates tried to downplay for weeks.

"Why don't we take it to the voters in 18 months?" Joiner asked. "There is a lot of misinformation out there....why not take it to voters?"

Spiegel wondered why local oversight boards had not been consulted. "Why are we having this hearing without even knowing from the bond oversight committee and audit committee that this is a prudent way to go?" she wondered. She added that when she walked her district, "door after door they said they didn't trust the school district. "If I couldn’t get the people of my district to agree to fixing the schools (on the ballot in 2012) that will be serving their children, how would they be interested in the prolongation of a tax, which really is like a tax increase? It really goes back to the question of whether it should be on the ballot and be subject to the vote of the poeoiple."

But in a multipurpose room at Grace Bordewich Mildred Bray elementary school on Wednesday afternoon, they were all forgotten amid the smiles and selfies.