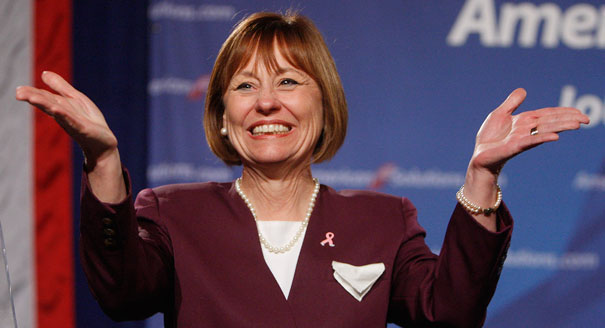 I broke the news late Tuesday afternoon that Assemblyman Brent Jones and state Sen. Don Gustavson had written a letter urging Sharron Angle to run for the U.S. Senate to take Harry Reid’s seat that she failed to win in 2010.

(I tried to contact all three but no luck.)

Then, late Tuesday evening, the full letter was posted here. And with a postscript added by Angle, it became clear this was a sanctioned effort by her (I thought so anyhow because she and Gustavson are pals) and that she really wants to run in a primary against Rep. Joe Heck.

Angle’s PS is almost an announcement: We can do this. I support Don and Brent sending this letter to you asking for your support to run for U.S. Senate. Many of you have asked if I’m going to run in 2016, when in reality, you have the answer to this question. YOU are the one who will decide the future of our country. Your financial support for this effort will make the decision much, much easier. I’m praying for your continued support so we stop the radical transformation that is happening to our country today.

►The letter is insane. It uses her 2010 debate taunt – “Man up, Harry Reid” – and kind words a few months ago from Donald Trump in South Carolina (I bet this has emboldened her in the summer/fall of Trump).

►Angle clearly wants to run by saying Heck is not conservative enough (I reported weeks ago that his ratings are no super-right and that some DC groups were looking for an alternative. I'm told this is not part of that effort.)  The anti-tax part of the letter is  both a shot at Heck (who did not support the new Commerce Tax and actually indicated on “Ralston Live” he was not thrilled with it) and the conclusion is ridiculous: One important difference between Sharron and all the other candidates in the race for the U.S. Senate is her vocal opposition to the Commerce Tax, Nevada’s new income tax on businesses and the creation of the Nevada IRS in the 2015 Nevada Legislature. We both fought hard to defeat this new tax and Sharron publicly took a stance at the Nevada Legislature to oppose it. If we had more leaders like Sharron as elected officials opposing the Commerce Tax, it would not have passed earlier this year. You will remember, it was Sharron’s and Senator Don Gustavson’s leadership in 2003, along with thirteen other fearless legislators that defeated this type tax that session.

►Jones and Gustavson raise the issue Angle once raised about 2010 – that Reid stole the election (he won by 40,000 votes and almost 6 points): There are still questions surrounding the 2010 election, which is why Voter ID is such an important issue today. Harry Reid and his special interest backers will do whatever it takes to prop up the partisan Democrat that is his handpicked successor. Once again Sharron has filed a petition to help up with the fight we started in the Legislature to require Voter ID in Nevada.

So will she run? Folks, we are talking about Sharron Angle, so I make no predictions. But it’s clear she wants to, and she still must have quite the email list. Remember, she raised $30 million in 2010, although most of that was pure anti-Reid money.

Could she be a factor? Heck is no Lowden, as I said. But if Angle raises enough money, and it will be difficult without national help (once burned, twice shy), she can make him spend a lot before she loses.

“Clearly even grassroots Republicans like Sharron Angle are fed up with the rampant dysfunction brought on by Congressman Heck and the politicians in Washington," the Reid Party's statement said after I reported her interest. So the woman the Democratic Party painted as essentially a crazy racist in 2010 is now a "grassroots" Republican.

Yes, the real winner here, as it was in 2010, is Harry Reid. And, of course, his anointed successor. Democratic candidate Catherine Cortez Masto.