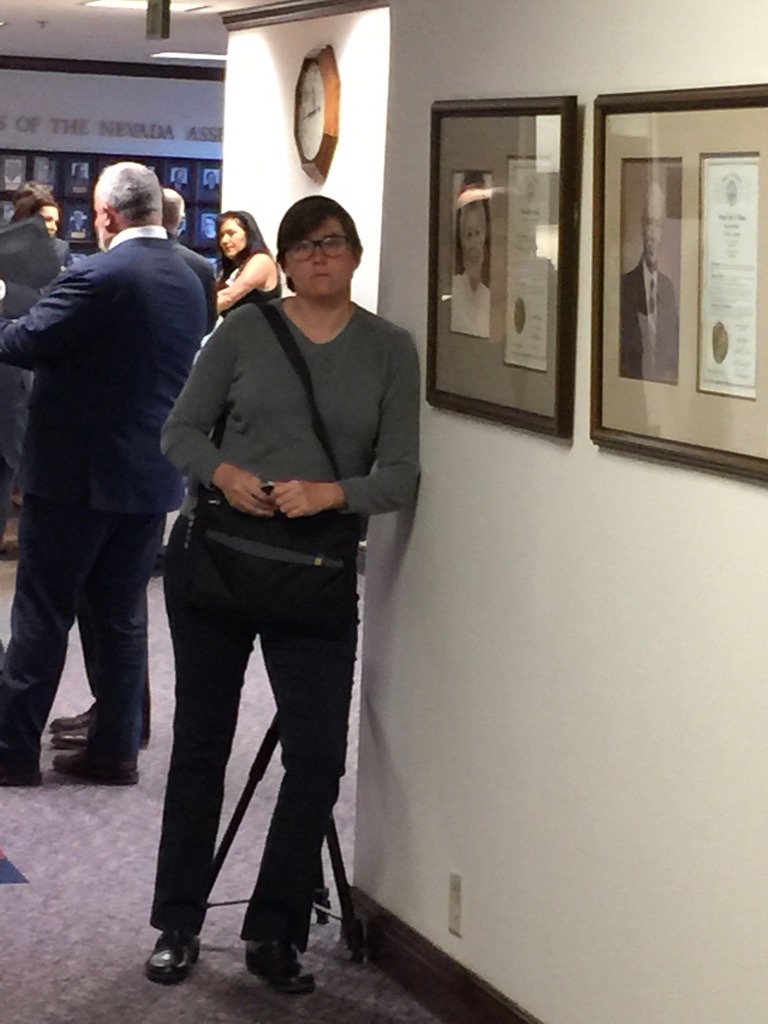 In a sign of escalating tensions with three and a half weeks left in the (regular) session, state Senate Minority Leader Aaron Ford on Wednesday accused Judiciary Chairman Greg Brower of threatening to kill all Democratic bills until a state party tracker is out of the building.

"He (Brower) told me, 'I'm not going to hear any more Democratic bills until she is gone," Ford said in an interview. "I told him it's a blatant abuse of power."

Brower denied saying he would entomb the bills, adding Ford is "overreacting." But I doubt Ford would simply concot such a story, which is making the rounds in the building.

Brower clearly is miffed at the tracker's presence and the general tenor of the Democrats' tactics. He also said, "I told him (Ford) I had a real problem with that stupid tracker....It is part of the slow, steady devolution in civility."

It has never happened before.

Kerry Durmick, the party tracker, has been in the building for a few weeks. She generally has stalked Senate Majority Leader Michael Roberson, whom the Democrats hope will lose his temper in front of her camera. Roberson is mulling a U.S. Senate bid.

Brower, whose seat is one targeted by Democrats this cycle, noticed the tracker in his committee Tuesday and talked about figuring "a way to kick you out," adding he planned to talk to Ford, who is on the committee.

The two chatted afterward, and Brower made what Ford called a "totally inappropriate" threat. "I told him, 'I'm not going to do your bidding for you,'" Ford said. The Democratic leader said the GOP chairman later pulled two Democratic bills off the docket, which he described as a retaliatory move. The two measures, AB 151 and AB 153, deal with adoptions and sexual expolitation of minors, were sponsored by Democratic Assemblyman Nelson Araujo and passed the lower house unanimously.

Brower denied any connection, saying -- hardly persuasively -- that he "wasn't there for the hearings on those bills."

Ford said the threat is idle because Democrats in both houses "don't expect any of our bills to pass. They have their own reason for doing what they want to do. But it's an abuse of power."

The Democratic Party -- a k a The Reid Party -- has from the session's outset engaged in guerilla warfare, sending out news releases pounding Roberson and the Republicans and dispatching the tracker to needle Roberson. Robersonhas complained to Ford, who, during delicate tax negotiations, called the party folks to have the tracker stand down from outside Roberson's office. Durmick was, however, back there today, albeit not pointing her camera at the office.

I asked Ford if he thought it was appropriate for a partisan tracker to be in the Legislative Building. He paused, reminded me he had expressed his concerns to the party people, then said, "I don't have a problem with it. This is a public building."

This little brouhaha is only more evidence of percolating partisan tempers. And there are 26 days left.

(UPDATE: I am reminded that Ford and Brower both work at the law firm Snell & Wilmer. Awkward.)