And it's good for Sue Lowden.

The Nevada Republican Party's brain trust (misnomer alert) has purchased a billboard near Decatur and the 215 that will lead some to believe that Gov. Brian Sandoval is running on a ticket with lieutenant governor hopeful Sue Lowden when he actually has endorsed her primary foe, Mark Hutchison. This is conclusive evidence, not that any was needed, that Lowden's friends are pulling the strings for GOP boss Michael McDonald, who has become a willing dupe to embarrass the most popular elected official in the state. (I bet Sandoval remembers this.)

The Democrats love it -- state party operative Zach Hudson has been all over it on Twitter. They want Lowden to win that primary.

The billboard does accurately reflect those fixed party endorsements -- Sandoval and Lowden both were embraced by the central committee. 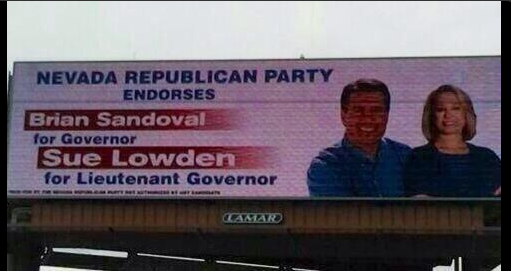