When the story was first posted on the Las Vegas Review-Journal's site on Thursday morning about a new study detailing how Cliven Bundy's standoff had encouraged radical right-wing extremists, the newspaper twisted it to comport to its-anti Bureau of Land Management world view: "National group criticizes BLM's handling of Bundy standoff."

As I pointed out, this was an outrageous distortion of what the Southern Poverty Law Center had done. Shortly thereafter, the RJ changed the online headline and the story itself. The new headline: "National group critiical of BLM, Bundy in BLM standoff."

OK, a little better. But the study is focused not on the BLM, but how Bundy and his enablers emboldened the sovereign citizen movement.

But the RJ wasn't done. Yet another headline graced the front page treatment of the story Friday in the print edition, putting Bundy's name first at least: 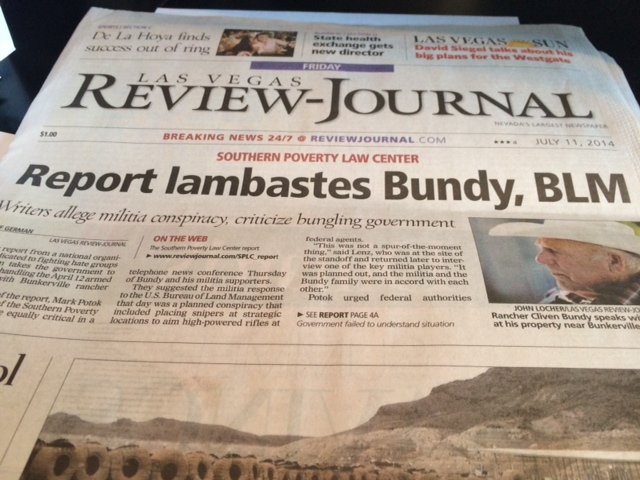 One story. Three headlines. (The online headline remains the same.)

Or perhaps I need to bring back "newspaper" for this grotesquerie?