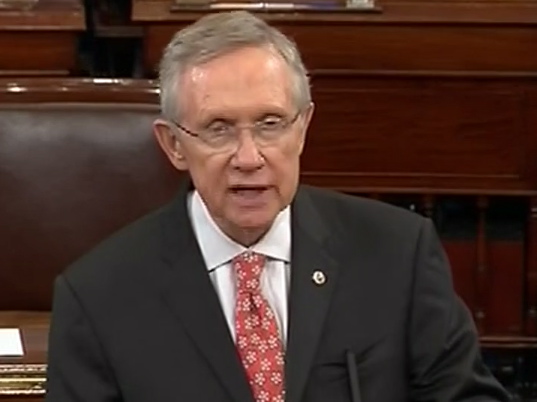 If you want an object lesson in why you should never underestimate Harry Reid, his shutdown shutout was a marvel.

Sports fans can be reveling in the stupendous pitching performances in the playoffs, but the real gem was being thrown on Capitol Hill. And the Democrats’ ace was never more on his game even though he only had one pitch: Hardball.

Yes, the victory may be ephemeral – another deadline awaits three months hence. And, yes, the House GOP rebels, with sustenance from the Cruz-Lee caucus, were disorganized and hapless, not to mention on a pointless crusade that could not end well. But neither of those factors should take away from Reid’s indomitable performance, showing why he is a master of the legislative game and how he continues to be the Democratic leader.

Indeed, he did what he knew John Boehner, for whom he shed crocodile tears, could not do: He led.

Frustrated from past presidential capitulations, realizing early on this fight could be won and deaf to the other side’s echo chamber, Reid correctly calculated that all he had to do, no matter what the Republicans tried, was Just Say No.

Open the government piece by piece? No.

Just give us a little on Obamacare? No.

I am not the first to notice Reid’s prowess, as Paul Begala and Bloomberg News have weighed in and The Washington Post's Chris Cillizza called him a big winner. And you could see it coming.

A harbinger of what was to occur this month came in July, when Reid took a hard line in that nomination imbroglio and was backed up by his troops. "Different circumstances for this fight, but same concept of holding his caucus together so any negotiation he entered he knew he would be holding very strong cards, and he was right," observed one Hill insider.

But what was especially noteworthy about Reid, in the face of the chaos and noise around him, was his preternatural equanimity, which a president known for his composure must have admired.

“What impressed me through this is he seemed to be the only one of the five, the four congressional leaders and the president, who had this eerie calm the entire time,” one of his friends told me. “It was like he had no doubt about the endgame…he didn’t seem to have a moment of hesitation or self-doubt.”

Even after the Republicans tried to change the momentum by highlighting one of Reid’s trademark, inartful comments, it soon dissipated, especially because what they were saying simply wasn’t true under closer inspection. Reid simply doesn't care about being demonized; he actually seems to enjoy it, or as one Reid insider put it, "It emboldens him."

Indeed, that piecemeal-opening gambit by the House was the tipping point in this confrontation. The Republicans surely thought they could divide Reid's caucus, which would not be able to stand the pressure of not voting to help the sick or needy veterans. But Reid knew what they were up to and would have none of it.

"The Rs thought they would get him to break or at least get a few Dems to support it publicly but that never happened," my Hill source told me. "Reid and the Dems were able to argue to public and to Rs that the piecemeal approach would not work, you can’t pick and chose certain agencies. Also it was a backdoor way to fund everything except Obamacare."

And that Reid would never allow, for personal and professional reasons. Even though his foes consider him a soulless, Mephistophelean character, Reid does believe in some things, and universal health insurance (single-payer even!) is one of them. As one of his associates told me, "He believes Obamacare is the greatest social program to reduce income inequality since Medicare and will do everything to save it."

You can see it in his language – he used the word “obsession” more than once to describe the GOP’s idée fixe. I think he cares about Obamacare for another reason, too: He has pride of authorship.
Political observers like to call this the president’s signature achievement, but without the majority leader's deal-making prowess, as noxious as many found it – remember the Cornhusker Kickback and the Louisiana Purchase? – Reid got that bill passed. So when you attack Obamacare, you are not just attacking the namesake – you are going after the architect. And this one has a steel spine, too.

Reid may never draw comparisons to Churchill or Cicero. But he can deliver a message over and over, especially the simple one he chose for this fight. How many days in a row did we hear variations on the “Tea Party anarchists” theme, with very little variation, actually?

Reid, who privately says he doesn’t believe in polling (except Mark Mellman’s, perhaps), knew what the surveys were saying about the Tea Party and also about who was being blamed for the shutdown. The majority leader also has a quality that is not to be overlooked in battles such as these, and that is patience. Reid knew that the longer the shutdown lasted, the worse it would be for the Republicans.

Very few people have more at stake in the blackening of the GOP brand than Reid, who doubtlessly saw an opportunity to plan ahead and perhaps sow the seeds for a campaign to preserve his title after November 2014. Yes, Reid is savvy enough to know this could all be forgotten by the weekend. But that’s what ads are for, and he also will remind everyone of what happened during the next round in early 2014.

And so Reid simply stood there for days repeating the same message, stiff-arming the House and his counterpart, Mitch McConnell. He rarely revels, and you can’t ever see glee cross his countenance. But during a few of those Senate floor speeches and press gaggles,  as he waved his arms and got that plaintive tone in his voice, I could almost see him….smiling.

For those who traffic in the “what will Harry do in 2016?” parlor game, if you have any doubt how much he wants to keep doing it, I submit the last two weeks. He had the energy, the desire, the resolve. If that’s there in two years, he’s running.

Reid took most of the day off Thursday, a well-earned rest for the man Begala cleverly dubbed, “King of the Hill.” Indeed, he was during the last 16 days. But I think Reid, who should write a sequel to Machiavelli’s seminal work, would not consider it a demotion to be called The Prince.