Rand Paul: No government involvement in gaming, no fears of radiation at Yucca, no governor should have expanded Medicaid 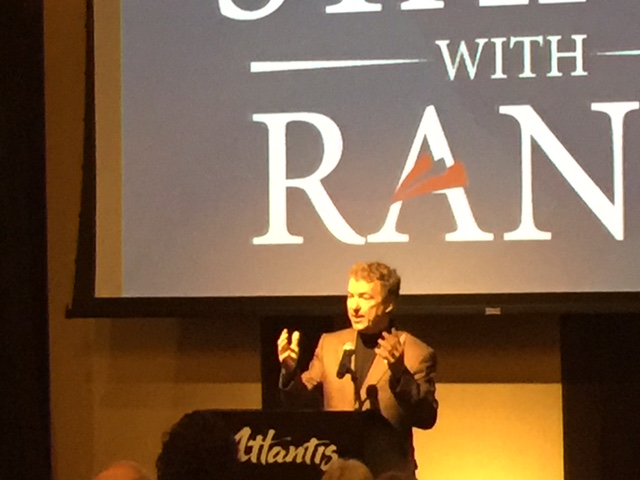 Acting presidential candidate Rand Paul argued Saturday that the government should “not be involved” in legalized gaming, obliquely criticized Gov. Brian Sandoval for expanding Medicaid and claimed he is “of two minds” on a Nevada nuclear waste dump but is “not afraid of radiation in a mountain.”

In a brief interview after a speech to activists at the Atlantis hotel/casino in Reno, the Kentucky senator also acknowledged he had “not thought it through” on how to return federal lands to Nevada after declaring, to great applause from the crowd of 100 or so packed into a small ballroom, “I personally think lands ought to belong to Nevada and not the federal government.”

Paul also said he has a “cordial” relationship with Senate Minority Leader Harry Reid, even though “he calls me names sometimes and I call him names sometimes, too, but that’s just politics.”

Paul also acknowledged in the interview that his on position foreign aid, which had been strangle all of it, now “may be slightly different” in that he only opposes giving money to regimes “who hates us and burn our flag.”

Paul’s Reno campaign stop for his incipient White House bid was the second day of a trip to early-state Nevada, where his father, Ron, has had a strong following that controlled the GOP apparatus but failed to reach expectations in presidential caucuses last cycle when the ex-Texas congressman was crushed by Mitt Romney. And it came at the end of a newsy week for Paul the Younger, who visited New Hampshire, which I understand also is an early state.

When I asked Paul about gaming, he signaled his position by immediately quipping, “I lost a hundred bucks last night playing craps.”

Then, he added, “I really don’t think the government ought to be involved in it. That’s a personal decision that people should make.”

Gondolier Numero Uno Sheldon Adelson will not be well pleased.

“What really gets me is the hypocrisy of people who love the lottery but hate casinos,” Paul continued. He talked about how lotteries often take money from very poor people but people in places such as Caesars Palace “are spending excess wealth and they come from all over the United States…It’s great for Nevada, and I wouldn’t do anything to stop it.”

When I told Paul, who has been very critical of Medicaid expansion under Obamacare about Gov. Brian Sandoval’s crowing in this week’s State of the State speech about how the program had dramatically reduced the number of uninsured and reduced the state money being spent, Paul retorted, “That’s what our Democrat governor (Steve Beshear) says also.”

There goes the Sandoval endorsement. So slights to the biggest GOP donor and the most popular Republican politician so far. Paul better hope his Dad’s activists here can win Nevada for him….

“To imply that somehow money coming in for Medicaid is a great thing for the state is to mistake that we are both federal and state taxpayers,” Paul told me. “You can say someone else is paying it, but Nevadans are paying it.”

Paul also said that while “the president has increased access,” costs have gone up, citing some CBO figures to back up an arguable proposition where there is evidence on both sides. And he added that another problem with Medicaid expansion is where the threshold is drawn.

On Yucca Mountain, I asked Paul if he believes, as he told the Review-Journal's Laura Myers that Nevada is a “leave me alone” state, would he then oppose any efforts to resurrect the nuclear waste dump in Nevada?

Paul proceeded to show his briefing was better than some presidential candidates, who have rotely offered the “sound science should reign” shibboleth, but not as good as some others.

Paul said there “could be more danger” allowing the waste to sit “out on a rilarowad trestle,” and then said, “I’m guessing they’ve done some research that there’s not any chance of it getting into the water system.”

Well, depends whom you ask.

“Some things don’t have easy answers,” Paul said. “I’m not sure what the answer is, but Nevada ought to have a say in it.”

Oh? The meaningless state veto came and went more than decade ago.

Paul then offered the possibility of a “trade-off,” saying, “If you’re Nevada and you’ve got Yucca Mountain, how much are they going to pay?”

Where have we heard that one before?

I asked one more time if he would oppose an attempt to revive the project, and he said, “I would have to look at exactly what the legislation said.”

Then, with a wry smile, he offered, “You know Harry Reid and I are good friends, so we could probably work it out.” After the joke, he added, “I actually do like Harry and hope he’s doing better (from his exercise equipment injuries),” Paul said. “We have cordial personal relations, and I think he’s a good guy, doesn’t mean we agree on a lot.” (He mentioned the two are partnering on a voting rights restoration act for felons.)

On the federal lands in Nevada question, red meat to the GOP base here, especially in the rurals, said he has”talked to some of the western senators about it…I haven’t looked at the actual legislation on how we do it.”

It clearly was a line for the Paulites that he knew would bring applause, and it did. But paul clearly has no idea – at least not yet – how to reduce the 85 percent of federal ownership. Then came this exchange when I asked about foisting the costs of administering the lands to the state:

Paul: “I haven’t looked at it enough to know how much cost there is to manage it….Do they not making any money on grazing on the land?”

Reporter: “Depends whether Cliven Bundy is paying or not.”

Paul (laughing): “Don’t get me involved there. I’m staying out of that one. I think I waded into that one before.”

Paul had told the crowd that “Hillary’s war” in Libya and Benghazi should “preclude her” from running for president, which sparked a “you should be disqualified” riposte from the Democratic National Committee.  I asked Paul to explain how he could be so against foreign aid and for such a strong national defense, along with his history of wanting to cut off assistance to Israel, which he has denied (and did again with me).

“I think the people who defend foreign aid say it’s a way of projecting power, exhibiting things that you want to happen in the world, influencing people,” Paul said. I think when you borrow money from China to send to Pakistan, it projects weakness not power….We shouldn’t give money to countries that persecute Christians.”

But what about those statements about Israel?

“What is misinterpreted and it’s a very emotional issue because nobody really wants to be painted as anti-Israel and and neither do I," Paul responded. "People say he used to be for cutting Israel and now he’s not. I was never for cutting Israel. I was really saying shouldn’t have foreign aid, period.”

PolitiFact has the history of what he said.

As he hustled to get away from me and my recorder, I asked Paul if his visit to Nevada was clear confirmation hat he is acting no more and is in the presidential race. His retort:

“Now you’re trying to be tricky.”