Organized labor won't be with teachers on margin tax 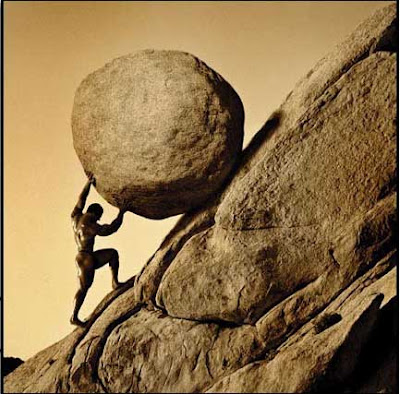 As the teachers union prepares for a Sisyphean fight to pass a new tax for education, the rest of organized labor is poised to roll the boulder back over them.

Sources confirm that the AFL-CIO, especially the 18 building trades affiliates, have decided not to support the tax it once enthusiastically backed. And Gail Tuzzolo, the longtime right-hand woman of AFL-CIO boss Danny Thompson, has become a paid consultant to the coalition trying to defeat The Education Initiative.

“It’s up in the air,” Thompson said. “Both sides are lobbying heavily.”

But what the union leader didn’t say, as I’ve confirmed through several interviews, is that he and others in the labor movement have been swayed by research conducted by consultant Jeremy Aguero,  which indicates the 2 percent tax on businesses making a million dollars could cost thousands of jobs.

The seriousness of this development should not be lost: It’s one thing for a gaggle of business groups to fulminate that the tax is a job-killer. But when the bearer of bad tidings represents working men and women, as they like to say, the messenger is less flawed.

This fratricide in the labor community has been a long time coming. The teachers often have been lone wolves, but at least the other folks in labor have pretended they are part of the pack.

Some will see this as endemic to the incestuous Nevada political scene, where what gaming wants, gaming gets. And if the AFL-CIO is playing ball with the anti-tax coalition, maybe there is a quid pro quo, cynics will whisper.

Maybe. But the provenance is not as important as the reality.

The AFL-CIO won’t officially vote until May. But the teachers would need two-thirds of the state convention, which no one I talked to says is possible. The only question is whether someone makes a motion to oppose the margin tax, which would put the AFL-CIO actively out there against the teachers as opposed to simply withholding support. “I think there is a good chance that could happen,” one labor insider told me.

Ruben Murillo, the head of the Nevada State Education Association, was not happy with the developments. “We knew fighting for education revenue was going to be a battle, but it’s time big business stops hiding behind working men and women,” he said. “These are deceitful tactics and will be repudiated by voters in November. The fact is better schools mean better workers and attracting high wage industries and jobs to Nevada. No one made this point more eloquently than Nevada State AFL-CIO Secretary Treasurer Danny Thompson who helped draft this initiative petition. We remain committed to the passage of The Education Initiative and providing our children with the resources they need to achieve their potential.”

But here’s what has been happening since Thompson gave full-throated support to drafting an initiative – he even helped pay for the drafting – and lambasted the serially do-nothing Legislature:

Sources tell me that Thompson and Tuzzolo have been greatly affected by Aguero’s research and have bought the argument that this is a job-killing measure. So have the building trades, which have those 18 members, and each has a northern and southern affiliate. That is an endorsement-killer.

The fact that Tuzzolo, a private consultant but who is inextricably linked to the AFL-CIO, has gone to work for the coalition of gamers, miners, retailers and business types will signal to others that Big Labor has gone south.

“I am working for the coalition,” Tuzzolo confirmed Tuesday. “It’s not unusual for me to be involved with gaming on an initiative.”

True enough. But this is a little different, eh?

If there was any chance the AFL-CIO were going to back this tax, Thompson would have told Tuzzolo not to take the gig. Enough said.

I’ve been told that another rationale for the AFL-CIO to oppose the tax is that the rate was boosted to 2 percent after a similar legislative proposal, with a .8 percent rate, failed in 2011. The argument will be that with the rate more than doubled and the deductions written differently, businesses, including gaming, will lay off many workers.

It’s one thing for Jim Murren, the head of MGM Resorts International, to say that.  It’s quite another if Thompson at some point comes out and says it.

Don’t forget, too, that the Culinary union, which has its own testy history with the teachers, has been mute on the margin tax. And all I heard Tuesday were crickets.

The teachers actually have a fundraising lead right now – they will report $1 million later this week vs. the coalition’s $700,000. But that is evanescent.

This is a big, if not decisive blow to the margin tax crew. Only two weeks into the new year, all the teachers have in front of them is that boulder, now being pushed down the hill by their brothers in arms.