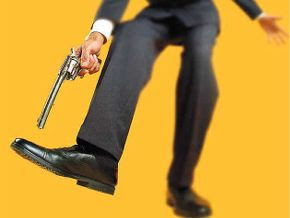 Leo Blenitsky, who heads the Vegas chapter of the Republican Jewish Coalition, defended hosting a birther by referring to him innocuously as an "author." His comment below speaks for itself, in all its grandeur and literacy:

So Obama associating with convicted Terrorists and Racists Reverends is not relevant, but if someone has a popular best selling author as a speaker at their event that the left-wing hates then that is really bad! Do I understand the rules correctly?

Wayne Allyn Root, the state's most famous birther, continues to be honored by state Republicans and may soon become an albatross for a congressional candidate.

I have detailed how Root has been an honored guest at various GOP events, inlcuding most recently with Sheldon and Miriam Adelson at a fundraiser for Niger Innis, the energetic CORE and TeaParty.net guy running against Rep. Steven Horsford. But Root also was on an invite this summer with Establishment elected Republicans from Nevada and DC.

Root clearly has been embraced into the Nevada GOP bosom. They don't just accept him; they are making him a star.

And now the Clark County Republican Party, the supposed bastion of sanity once the Establishment ousted fluoride-hating and Ron Paul-loving Cindy Lake in favor of Dave McKeon, is highlighting Root, too, along with the local adjunct of the Republican Jewish Coalition, which Adelson hugely supports.

You can't make this stuff up, folks.

Root's is the first name listed and the first bio highlighted on an invite for a "Republican Jewish Coalition/CCRP Holiday Mixer with Niger Innis and Wayne Allyn Root."

Seriously, what are they thinking?

Root has been all over national television and the web spreading his garbage, saying stuff such as this in speculating the president was not really at Columbia or was a foreign exchange student, as he told Sean Hannity (even Hannity was skeptical!):

Did he attend Columbia as a foreign student? That was the educated guess I made in my appearance on “Hannity” on Fox News a year ago. The only photo of Obama from his Columbia days was in his off-campus apartment with a roommate described by USA Today as a Pakistani national, pot smoker, and cocaine abuser. If you’re a foreign student, you live in housing off-campus with other foreign students.

Root is upset at being called a birther, but if the label fits....

I've written about this for quite some time as Root's insatiable desire for publicity has been directly proportional to his ratcheting up his birther rhetoric. MSNBC's Rachel Maddow picked up on Root after I broke news of the invite this summer with Nevada GOP elected officials and House No. 3 man Kevin McCarthy. In her piece, Maddow played the clip of Root saying Obama was an illegitmate president who got into college as a foreign-exchange student with an Indonesian passport. Root responded in a bizarre piece in which he accused Maddow of trying to "defame and slander me." (He also has had a lawyer contact me.)

Maddow said during her program, believing the Republicans here have common sense, that "eventually people are going to stop calling (Root) altogether (because of his birtherism) or at least you would think they would."

Yes. You would think.

​I, frankly, am surprised that a guy as experienced in politics as Innis, who has potential in that race against Horsford, has decided to attach himself to Root. I'm also surprised that Adelson and others welcome him into the tent.

Amazingly, Chairman McKeon told me he was "unaware" of Root's birtherism. Innis' campaign wanted to know why it is important.

Here's a guess: Not just Horsford, but a lot of people will think it's important. Or they should, even if the folks who keep appearing with Root and should know better do not.