MY COLUMN: The Tesla deal had be done; now comes the hard part 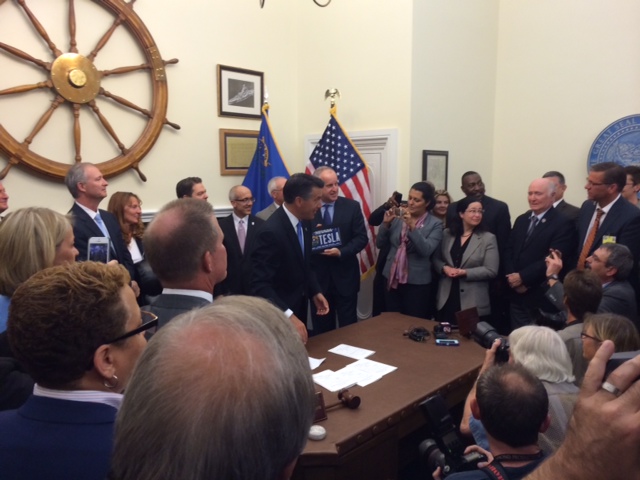 Imagine if Gov. Brian Sandoval had just said no to Tesla.

Imagine if he had told Elon Musk he would not submit to his demands for as much as a billion dollars in tax breaks.

Imagine if the governor had announced to the world that Nevada would not play the incentives game.

Just imagine. And then realize how insane that is.

You can say Musk was Vito Corelone, making Sandoval an offer he couldn’t refuse, forcing him to accept onerous conditions because there is no alternative. You can say the governor and his obedient Legislative Building denizens last week climbed on a tax incentive train to nowhere. You can say Musk played the state for suckers, with all the risks on one side and that the state's elected officials mortgaged the state’s future for a few lithium-ion batteries.

You could say all of that. And you would be wrong.

Sandoval long ago made the decision that this recession-ravaged state, battered by decades of failure to improve the education system and buttress the physical infrastructure, had to play in this arena but from a position of weakness vis a vis other states, which meant the best legal bribe wins. Sandoval and lawmakers know this is a gamble. But it's not like betting on green in roulette; it's more akin to sitting at a blackjack table, counting cards and putting the odds in your favor.

Most of all, Sandoval saw this as a chance to do what Nevada so rarely does – play long ball instead of small ball, transform the state from a place branded as a Third World wasteland to a maturing, evolving state that could have its own high-tech cluster and forever alter how Nevada is viewed by outsiders.

But the real question is not about the predictable, relatively uneventful 28th special session but how “special” the 2015 regular session is and whether Sandoval and the Gang of 63 can prove equally bold in the critical Part II of The Great Tesla Gamble: Once and for all, in the wake of the likely defeat of The Education Initiative, adjusting the tax structure to comport with The New Nevada, creating funding streams that will ensure a Tier One university exists, provide a K-12 system to showcase and bolster a physical infrastructure still reeling from a quarter-century of growth.

This is the true swinging for the fences, not the choked-up bunting that engenders silly sectional debates or inane arguments over film tax credits. I saw signs during the two-day special session that Sandoval has the true leadership skills – the preternatural sunny outlook combined with a steely, savvy efficiency – to carry this off. And I also saw positive adumbrations for 2015 in those two days, including productive alliances between Speaker Marilyn Kirkpatrick and the governor and Kirkpatrick and Senate GOP Leader Michael Roberson, that could lead to a solution to the strains on the state’s infrastructure that already existed and will be exacerbated by the Tesla gigafactory.

But I am, alas, colored by history and of great Carson City expectations dashed by Legislative Building myopia, cowardice and ineptitude. And we also saw some ominous signs of that during those 48 hours last week that cause me to temper my irrational exuberance.

Even Senate Majority Leader Harry Reid, who worked with Sandoval to help get Musk here, could not stop his state Senate Democrats from making utter fools of themselves as the world was watching. It didn’t have to be this way.

Before the session began, before the proclamation from Sandoval was issued, the Senate Democrats actually did a smart thing: They tried to get the governor to include language for an automatic rollover of school bonds, thus hastening construction.

But Sandoval, beset by other supplicants, including a Switch Communications pitch for its own tax incentive package, decided to keep the focus narrow. So that left the checkers-playing Senate Democrats – the majority, I remind you, in the upper house – with only one smart play if they really wanted to get anything done on education, all historical evidence to the contrary.

That was to stand up on the Senate floor and talk about Tesla’s strain on the infrastructure, especially the education system, and demand that the governor either amend the proclamation (legally dicey) or simply do it in a special session immediately after the first one concluded. But….they did not do that.

Instead, they didn’t just play small ball; they hit themselves over the head with their bats, raising serious questions about whether they are qualified to be in the majority come 2015.

Majority Leader Mo Denis’ gambit on the first night of the session to inform the governor the Senate Democratic caucus was standing firm and demanding $40 million be restored to a film tax credit package will go down in Nevada history as one of the more ill-considered, disastrous “power plays” ever incomeptently mounted. After swatting away Denis, Sandoval had every reason to believe the issue was dead, especially because he already has communicated to Denis and bill sponsor Aaron Ford that he would be supportive of the film tax incentive program,in 2015 despite its questionable value. (UPDATE: Ford, for some reason, continues to deny this ever happened, even though I confirmed it did. And his colleague, Kelvin Atkinson, acknowledged it happened six days earlier, too.)

But that was not the end.

The next day, on the Senate floor, Ford and Sen. Patricia Spearman gave impassioned speeches. Not to fund education. Not to ensure the Tesla impacts were considered. But to save the film tax credit because, they incredibly and disingenuously argued, families would be thrown out of work, people would be hurt.

Consider that there is no evidence any jobs would be lost because of the gutting of the film tax credit and that Sandoval left $10 million of bridge funding to 2015 in there. And let me understand this: These folks would later vote for a measure that would essentially put families in soup lines, to listen to their line of argument?

Shortly thereafter, the Senate approved the Tesla tax break bill, not only without a no vote but with no explanation from any senator. Where were the passionate pleas for education then? I was later told they wanted to get the bill down to the Assembly so it could be vetted and approved, that speeches would be given later. (Indeed, a couple of senators would read prepared remarks about education after everything was passed, simply creating a record for their Twitter feeds and campaign mailers. Pathetic.)

But that ignores the critical question: if this bill was so important, why did it have to be rushed down to the Assembly? And while the Assembly folks asked many more questions, and many good ones, about the bill under Kirkpatrick's guiding hand, why the imperative to get in and get out if this was the BIGGEST THING EVER?

I don’t know how some of those senators jammed into Sandoval’s office later Thursday night to engage in the celebratory atmosphere and pretend none of what had just occurred had occurred. They were cheering and clapping for a law that was going to put people out of work, to destroy the lives of extras on “Mall Cop Two.” How could they? The humanity!

In the aftermath of the session, more nonsense is ensuing, including the ludicrous proposition that the South ever had a chance to get Tesla, that the “Governor of Reno” was just a homer. Really?

Besides the ivory tower know-nothings and the southern partisans flapping their lips, the facts belie all of this. Musk came to Northern Nevada because of proximity to his California facility and access to rail lines and highways. He was never going to come South. And, of course, the projected economic infusion will help the entire state.

I am infuriated and flabbergasted by business folks, and the so-called southern economic development experts, who are part of a Just Say No Caucus that has blocked education improvements for decades while failing to enforce southern legislative unity that could have passed anything for years. Spare me your sectional stupidity now, folks. You lost the right to complain long ago.

People can nitpick the deal all they want. People can raise serious questions about whether incentives work and whether changing technology could make the gigafactory obsolete as soon as it is built if it can’t be reconfigured. People can worry about whether the economic projections are too rosy, whether the jobs will materialize.

There have been several pieces in the wake of the deal that have raised some serious questions, including in The New York Times. The las Vegas Sun also published some criticism, although the notion that gigafactory employees would live in California and commute is ridiculous.

No one who insists the state gave away too much was there during the negotiations led by Steve Hill, the governor’s economic development czar who impressed nearly everyone during the special session with his gravitas in the face of grilling, substantive and otherwise. Don’t forget Sandoval and Hill refused to give in when Musk tried to renege on the original deal and asked for $500 million in cash on top of that. They had already raided the film tax credit and a home insurance office credit; that was as far as they could go.

I'd guess most of the critics have not read the actual bill, which has performance benchmarks and clawbacks that even impressed tax hawk Carole Vilardo, who could not contain her pleasant surprise on "Ralston Reports" right before the session ended.

Yes, there is a risk. And even Sandoval hedged when he declared at his post-session news conference: “We have, perhaps, changed the trajectory of this state forever."

It’s up to him in 2015, along with the Legislature, to make this less uncertain with a funding package that puts the state on the path to prosperity and diversification. He and lawmakers already are privately talking about it, a good sign. It’s an essential second part of the Tesla deal.

Just imagine if they don’t.