MY COLUMN: The man who rules the roost in Southern Nevada local government lobbying

A few years ago, I walked into the Stirling Club bar at the exclusive Turnberry Towers. Jay Brown was already there, waiting for me.

The lobbyist extraordinaire had invited me to discuss a column I had written that he said he could persuade me was wrong. As I approached, I noticed in the center of the table was a bill – a $100 bill.

“If I can’t convince you by the end of this conversation that I’m right, you can put that in your pocket,” he told me.

I shook my head, told him to put the money away and listened for a half-hour or so. He did not persuade me.

In that, I am in the minority.

This is how Jay Brown does business, with a smooth but ham hand that dispenses money as he makes his case, influencing elected officials, winning millions for his clients and making himslf a very wealthy man. His combination of relationship-building and fundraising with local government officials is unparalleled in the state’s history, with the specter of his close friend, Senate Majority Leader Harry Reid, certainly good for his business.

So when I started to hear rumbles that Brown was representing multiple clients in the soon-to-be-lucrative medical marijuana scramble, I was hardly surprised. And when I discovered he was charging one client $37,500 up front and asking for a 9 percent cut of the business for 10 years, I would have been shocked except:

Chutzpah is his calling card.

Brown has been doing this for years, selling his influence with local governments and reaping the benefits for his clients and himself. And now, with medical pot licenses up for grabs in multiple venues, he has a number of clients who have inherent conflicts of interest whom he has persuaded to waive because, well, he’s Jay Brown.

Brown is a one of a kind Vegas character in a city that has had a few colorful figures in its history. Harry Reid’s close friend, who helped him with a controversial land deal a few years back. Mob lawyer and future Mayor Oscar Goodman’s former partner, including during the days when Lefty Rosenthal & Co. ran the town. A ubiquitous presence at Clark County and Southern Nevada City Council meetings, advocating for a variety of development and business interests.

If you have seen him argue, he is almost always prepared, mostly deferential, occasionally brusque. Most of the time, before he arrives in the chambers, Brown has helped grease the skids.

During the last three years, he and his wife, Sharyn, who happens to have concessions at the county-run airport, have given local politicians more than $100,000 through personal funds or businesses they own. And that is only the tip of the iceberg as his clients, which include the garbage monopoly, Republic, and major developers such as Billy Walters and Brett Torino, also have given tens of thousands to city and county officials. (To be fair, they may have given a lot anyhow. But this is a chicken and egg question.)

This helps buy Brown, as historical results show, that special Vegas concoction known as juice, which in turn begets victories for his clients. Which brings us to his involvement in the medical pot enterprise. Clark County is the furthest along, having turned the process upside down in a way that could benefit Brown and his multiple clients. (Brown is not the only attorney with his hand in this, ahem, pot, but he has the most hands in it, so far as I can tell.)

Brown all but lives at the Clark County Government Center. I haven’t checked lately, but I believe the sign as you enter says, “Abandon all hope ye who enter here, unless Jay Brown is representing you.”

We will know more next week when the four commissioners up for re-election file their campaign contribution disclosures. But we already know Brown has been generous to those he is asking to grant medical pot licenses for his clients. To wit:

Chairman Steve Sisolak, who is not up this year, has taken $20,000 from Brown since 2011. Brown’s clients have given much more than that, especially if you count Walters, who bundled tens of thousands on his own..

Brown also has given at least $5,000 to each of the other commissioners and even more to some, including Chris Giunchigliani, who received another $5,000 from the interesting and misleadingly named Washington DC Investments LLC. Insert Reid joke here.

With the atmosphere on Grand Central Parkway so welcoming, it’s no wonder so many potential medical marijuana businesses have sought out Brown and that he has managed to craft legal documents that put him on the edge of the ethical line. That is, he has managed to secure agreements from a number of clients to pay him five or six figures up front and give him a percentage of the business. Other advocates, I am reliably told, asked for even more in advance and have larger shares. But none have as many clients as does Brown, who told me he would have charged more if he were only going to have one client, or have rounded up so much campaign cash for those making the decisions. 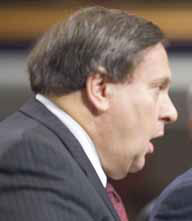 Brown was quite open that he began looking for medical marijuana business as soon as the law was signed by Gov. Brian Sandoval nearly a year ago. And, not surprisingly, he has been quite successful.

Brown naturally has enemies – he has beaten a lot of lawyers before local governments. Some just don’t like the way he does business. And attorneys do have opinions.

One lawyer told me he does not understand, even though clients have signed conflict of interest waivers, how Brown can zealously advocate for more than one client with a finite number of licenses available.

“He is going to know what the others’ deficiencies are,” this veteran attorney told me. “He is going to have clearly relevant information of a privileged nature. He is not going to be able to get that out of his head.”

The state Bar has yet to weigh in since I disclosed the Brown agreements, although I posted the relevant rules of professional conduct that may apply.

Another very experienced lawyer said the perception is what could hurt the most – that is, that Brown is using juice to get what he wants and that the campaign money may influence the elected officials.

But, this lawyer added of Brown, “He is excellent at cultivating relationships, and he has been doing it for 40 years, and cultivating relationships can and is done honestly and legitimately:  lobbyists of all persuasions insist that their greatest asset is their credibility, their research into complex issues that lawmakers do not have time to study themselves, etc.  With Jay, I think every public official would say that they know what he’s doing:  advocating for a client, within the bounds of proper conduct, and that they take everything he says with the understanding that he is pushing his client’s agenda.”

Some may see that as a benign, even naive description of what Brown does. But the outcome is the same.

Even if he has a compliant County Commission – and that remains to be seen on this issue – Brown may still have some issues with the state. The medical marijuana regulations talk about disclosure being triggered for anyone with a 5 percent “ownership interest,” and the statute stipulates that no owner may have more than an aggregate interest of 10 percent in any county (remember Brown has multiple clients who could win licenses). The definition of “ownership” may eventually come into play, although the notion of lawyers investing in startup companies has long been controversial, as one law professor pointed out.

Although some believe equity investments in startups can bond the lawyer to a client, as the paper says, "there are others within the legal community (both academics and practicing lawyers) who just as strongly believe that these equity investment arrangements significantly undermine time-honored ideals that have long guided the legal profession in determining how lawyers should go about fulfilling their ethical and fiduciary obligations to their business clients."

Add in a guy with as much juice and as many clients as Brown and the scheme the county has erected and, as Craig Mueller, another attorney involved in representing someone on medical pot said on KNPR on Friday, “It is a loophole surrounded by a law.”

Just the way Jay Brown likes it, especially when he has been so helpful to the elected officials he has to persuade of the righteousness of his position.

As I departed Turnberry Towers after that Stirling Club meeting with Brown, I left his money on the table. That’s something elected officials almost never do.