It's bad enough for politicians having to deal with animal activists. But what happens when you placate them but infuriate representatives of a key demographic?

So a couple of days after Clark County commissioners said no to certain events at Mexican rodeos, Chris Giunchigliani says she will revisit the issue of permitting because of a huge backlash after Tuesday's vote. That included calls from Hispanic lawmakers, including Senate Majority Leader Mo Denis, who said they believed an unwritten agreement with the "Charreria" (Mexican rodeo) folks after passage of a bill banning the practice of horse tripping was to allow them do their horse roping events, including an upcoming performance at the South Point.

How angry are folks? Angry enough to produce this: 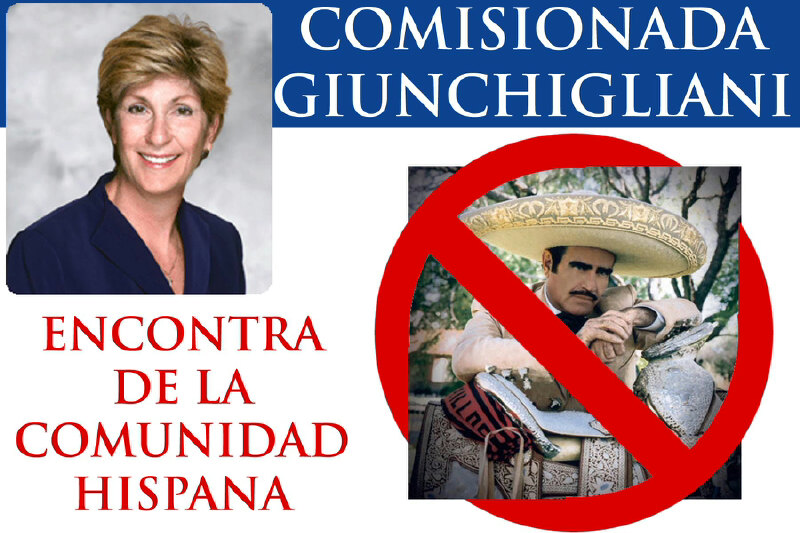 Translation: Against the Hispanic Community.

That was sent to commissioners by rodeo activist Alex Galindo, with a note Wednesday morning that said in part:

This is what I was afraid of and trying to avoid. Its being shared within the Hispanic Community and I'm afraid there will be more. They feel betrayed and discriminated against.

Others told me they were getting calls and emails about discrimination against Mexican rodeos and betryal by lawmakers who made a promise. I have obtained several email trails that show the national president of the Mexican rodeo association weighing in, angrily, since commissioners essentially voted to deny horse-roping contests a permit. This is distinct from horse tripping, they argue, because with roping it is a catch-and-release.

Please don't make me explain more. Call Cowboy Tom Collins if you want the nuances explained. He says no one on the commission but he understands this stuff anyhow -- he was the lone vote against this.

What is fascinating are all the emails that went back and forth, and prompted legislators Denis, Lucy Flores and Ruben Kihuen to call their frends on the commission. Giunchigliani said she promised Denis to reconsider the item, but wants Mexican rodeo folks there to explain the differences between roping and tripping, which has been long banned.

"I have asked for an item to reconsider the ordinance that established a permit for horse roping/tripping," she emailed her county colleagues this afternoon. "It will be the same ordinance with the vet amendment read by the DA and a 1 yr review period. Thanks for your patience on this matter."

Here are some of the emails that preceded that one, starting with the one from the national leader of the Mexican rodeo association to Flores and copied to many others, including Galindo, who works at the Venetian and clearly is furious, as well as some between Collins and Flores:

From: Toby de la Torre, CEO Charros Federation USA
To: Lucy Flores
Hello Assemblywoman Lucy Flores,
Thank you for your participation. I am reviewing recent and past emails and correspondence. I can't ignore the fact that many people are upset and rightly so because of the apparent lack of honoring verbal and written agreements that we believed were reached between the NHLC, Commissioner Chris G. and Oscar Peralta. Once again, I thank you for you efforts and support. I don't think any one person is to blame for anything, what matters now is that we unite to repair the obvious. Something went wrong at the recent hearing. Many many representatives and constituents did not go to the hearings because we were confident that agreements and negotiations would be honored.
I did request and use The NHLC letter and bill to help represent Charreria's concerns with proposed Oregon legislature. I also appreciate your and the NHLC and Oscar Peralta's efforts in representing our concerns to help assure fairness and equal treatment regarding our sport and tradition during Nevada legislature.
I also enjoyed conversations and emails with Commissioner Chris Giunchigliani before she left on vacation and returned shortly before the controversial hearing. Many agreements were reached and almost every concern was discussed and I believed Chris when she said she was willing to work with us in a fair manner and that our concerns for contemporary Charreria would not be a problem. I cc'd the commissioner in this email for transparency and good faith reasons.
We agreed that roping of horses legs would be allowed, and that no horses would be tripped, and permits for practice sessions would not be required, and we spoke about the permit process covering six months and possibly more. We also agreed that the California "On Call" procedure would suffice and the wording can be agreed upon. I understand that emotions may have played a part in her decision to pull her proposals at the moment, but this is definitely not over. Keep in mind that the people that offered their testimony did not specify any eyewitness accounts. The shock value and tactics of using footage from the events in Mexico should not have any bearing on our events. Their testimony amounts to assumptions and libelous slander.
I firmly believe that reasonable resolutions can be reached without a circus atmosphere and ridiculous waste of resources.
12 states that have a anti tripping law do not prohibit the contemporary horse roping events in Charreria.
I distinctly remember that we were assured by Oscar that your agreements would secure that Clark County ordinance would respect the requirements of Nevada state bill and follow suit, as well as permit the WBCE event at South Point would not be challenged. Furthermore I distinctly remember that we were told that the passage of this bill would secure our sport from frivolous extremist efforts and that NHLC would not tolerate future bills that would attack Charreria, and the passage of this bill would let us concentrate on economic or other important issues that arise. I understand that it was regarding state level bills, but it seems that Commissioner Chris G. was very involved in state proceedings
I definitely believe that the ordinance should be reconsidered,and everybody's agreements should be revisited.
Blame will not resolve anything. We just need to know what is going to be done, and what action will the NHLC and others do to restore faith and trust in good faith agreements. I distinctly remember that the goal of NHLC was to pass sb 72 to avoid further waste of time and valuable resources on these issues. The whole matter and blatant disregard for our constitutional rights seem to be on the line here. The department of justice civil rights department comes to mind.
I believe we should meet in person and go over the facts. I welcome key opposition to state their case and facts in person. Say 2 reps from all sides and the commissioners.
I do have a few questions and concerns.
1. What agreements did you and Commissioner Chris G have. What was you're impression and belief.
a. She mentions no opposition to ordinance in 2010 or the recent hearing. Obviously something wrong here as well (there might have not been speakers or reps, but petitions and opposition definitely exist. Trust has been trampled on. The Charro and Mexican American community and advocates are enraged at the claim that there is no opposition).
2. Why are videos and images from falling/tripping/events in Mexico being use against us.
3. I have requested addresses for the arenas or venues where alleged horse tripping goes on for more than two years, . I have not received one. Several requests were made to Senator Manendo and activists, and neither provided any information.
4. Many of the opposition never provided substantiated proof of claims.
5. So far, it seems that Tom Collins and our videos are eyewitness accounts. I am attaching Veterinarian Robert Bradley's testimony and videos including the follow up of the Winnemucca incident.. Please review them.
6. Opposition offered verbal claims regarding AQHA and PRCA, I offer you documents.
Best regards to all. Hope to hear from you real soon, Toby D.
On Wed, Aug 7, 2013 at 8:12 PM, Asm. Lucy Flores > wrote:

I understand that you and others are upset. While we have no control over what the Clark County Commission does, I do acknowledge that it was our understanding that the permitting process wasn't going to run into any issues. That being said, we cannot control what other political bodies do. I will however stress that this does not change anything in Clark County. The County had already passed an ordinance banning events where horse legs are roped. The state law that we passed simply outlaws the intentional tripping of horses. We do not ban any kind of horse roping events. Additionally, it allows for events where legs are roped where a permit is issued for the event. And lastly, as long as there is no money being collected, the horse roping community can still practice horse roping of the legs as long as they are not intentionally tripping any horses.

So while it may be convenient to direct "blame" to me or others, I can assure you that the law we passed does not negatively affect the Charro community in Clark County or anywhere else for that matter. As you stated, the Charro community DOES NOT TRIP HORSES and therefore, there is no violation of the state law that we passed.

I hope that the County can reconsider this permit again in the future, or even better, reconsider repealing their ban in its entirety.

Sent from my iPad

> Hi Assemblywoman Flores,
> So who's fault is it now?
> http://www.reviewjournal.com/news/las-vegas/clark-county-commissioners-say-no-rodeo-horse-tripping
> WE DO NOT HORSE TRIP !!!!
> Alex G.
>
>
>

-------------------
From: "Asm. Lucy Flores" >
Date: Wed, 7 Aug 2013 20:15:19 -0700
To: Tom Collins
Subject: Re: Horse roping ?
I don't know, Tom. We worked hard on this because we were assured that they would get a permit. I honestly have zero idea what type of lobbying or other things were done to get so many no votes from the Commission. What I can tell you is that the state law we passed does not in any way hurt the Charro community. What hurts that community is this ban that the Commission passed. I haven't talked to Chris yet. I plan on talking with her tomorrow.

Sent from my iPad

I’m glad you worked so hard to help. What happened to the Trust we all were counting on Yesterday ?

They trip commissioners, don't they?