Barrick Gold of North America is hosting a meet and greet next week for lieutenant governor hopeful Mark Hutchison, who last year signed onto a $600 million tax increase proposal on the industry.

The event is one of two for Team Hutchoval in DC next week, but both are now meet and greets and not fundraisers for Hutchison and Gov. Brian Sandoval because of Wednesday's special session to approve those Tesla abatements. State law prohibits lawmakers and the top two constitutional officers from raising money within 15 days after the session.

Mining lobbyists were furious last year when state Senate Minority Leader Michael Roberson and five other Republicans, including Hutchison, called a news conference to propose a mining tax increase. But all apparently is forgiven as Barrick is hosting Hutchison on Wednesday morning in Washington. The invite (below) has the names of four U.S. senators, including Nevada's Dean Heller, as well as a usual suspect list of Carson City lobbyists.

Hutchison has been scurrying away from that mining tax proposal since the primary when he was pounded by Sue Lowden for backing the measure. He has spent a lot of time on a rurual apology tour in which he has all but pretended the tax plan did not exist. Just last week, at Hispanics in Politics, Hutchsion told the group when his foe, Lucy Flores, brought up the proposal:

"And the question of course was is there an alternative to the margins tax?  Let’s at least have a discussion on it.  Listen, I’m a big fan of mining.  I believe mining is one of the most important industries in this state and I’m committed to making sure there’s a strong mining industry within the state of Nevada."

And mining, or at least Barrick, which also has given him at least $5,000 for his campaign, is now a big fan of his. Has he seen the light or has Barrick seen polls showing him ahead?

Meanwhile, the governor is having a meet and greet the next day with some of the same folks (and Elon Musk's Solar City) at R&R Partners' DC headquarters. (That invite is below, too.)

I'm sure this will cause no chatter in DC. And I'm sure there will be no talk of financial commitments at either event. 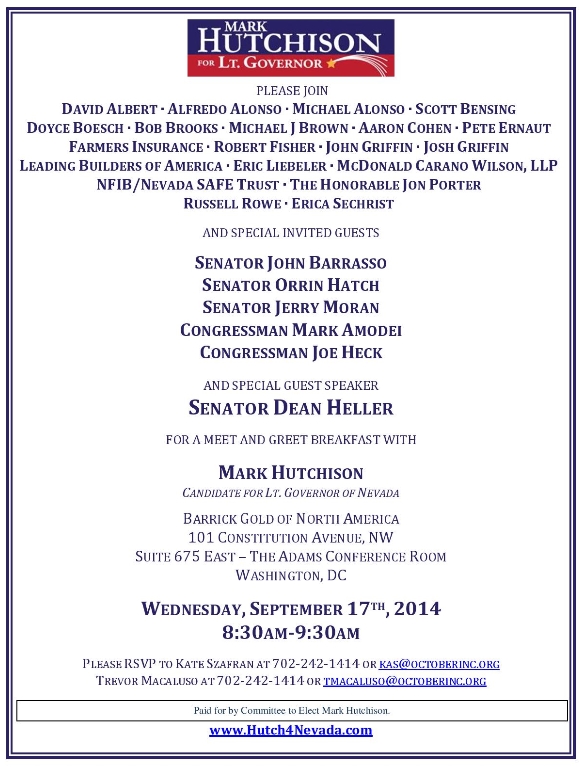 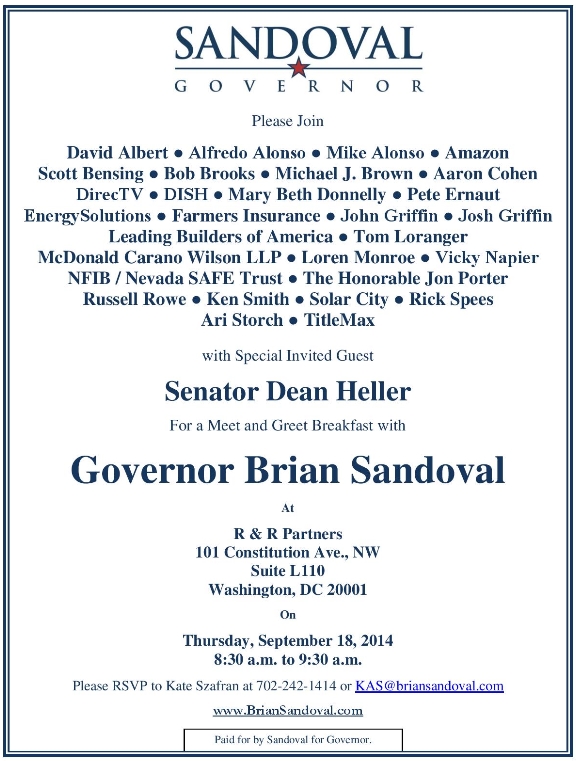