Legislature provides steps to screwing up an expulsion 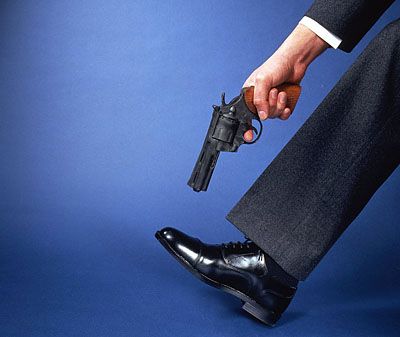 I have long believed that lawmakers -- or the vast majority of them -- want Assemblyman Steven Brooks expelled.

But because this is the first one in history, you would think they would do it right. Or at least be careful.

But then I remember of whom I speak: The Gang that Couldn't Expel Straight.

With the latest idilocy -- Sun Political Editor Anjeanette Damon reports that the lawmakers want to keep a 300-page independent counsel's report on Brooks private -- the Legislature is in the process of writing a gudiebook on how not to expel a member. The chapters so far:

1. Form a special committee risibly named "Select Committee on the Assembly" and give the chairman near absolute power. CHECK.

2. Without any clear authority, banish lawmaker from place where he has been elected to do his duty. CHECK. (Oh, as bonehead bonus, tell the state Supreme Court, which could well decide the fate of the session in several different ways, to butt out of your business. Mensa stuff here, folks. CHECK.)

3. Announce that you will close parts of the select committee's hearing. CHECK.

4. Declare that independent counsel's report, on which you will base your decision, can be hidden from the public. CHECK

I would be amazed if the media let this last one stand. Ever hear of redaction, folks? If there are medical records or other documents that require privacy, no one would argue. But the whole report?

Can't wait to see what's next from the Gang of Geniuses.

UPDATED: Legislative Counsel Bureau Director Rick Combs cited the authority vested in the Gang of 63 by Article 4, Section 15 of the Constitution: "The doors of each House shall be kept open during its session, and neither shall, without the consent of the other, adjourn for more than three days nor to any other place than that in which they may be holding their sessions. The meetings of all legislative committees must be open to the public, except meetings held to consider the character, alleged misconduct, professional competence, or physical or mental health of a person."

As you will notice, it doesn't say they have to close the meetings, as a bunch of good ole cowboys and miners might have thought was a good idea for one of their drunk and disorderly pals back in 1864. It would be their decision to close it.

"It would defeat the purpose of conducting the review of the report in a closed portion of the meeting if the Committee released the report to the public," Combs emailed me.

Maybe. But it defeats the prupose of this historic tribunal if they make it into a star chamber.

I wonder if any of them have read the public records law.