Innis is a provocative candidate for Congress, but he is big underdog 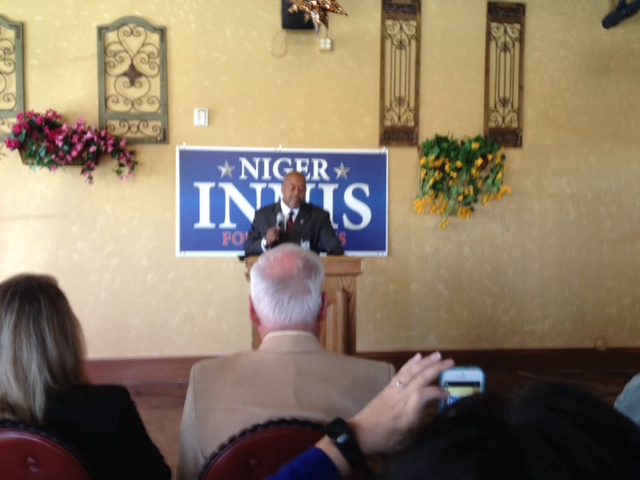 The event took place on Norman Rockwell Lane but the tableau would have been unrecognizable for the painter: An African-American tea partier with a predominantly Hispanic staff announcing at a Mexican restaurant with a rural cowboy at his side in a place called Las Vegas.

Rockwell’s portraits of Americana conjured no one like Niger Innis, whose picture would be more at home in The American Spectator than the Saturday Evening Post. But there he was in far northwest Las Vegas on Wednesday on a street named for the author and declaring his intention to be the second African-American in state annals to serve in Congress.

He is running against the first, Steven Horsford, a freshman who is not seen as particularly vulnerable (Democrats have a double-digit percentage lead) but who could find himself in a competitive race if 2014 becomes an annus horribilis for the Democrats.

Innis is a mélange of sometimes contradictory characteristics, most of them in evidence at Leticia’s Mexican Cocina, where  he was introduced by Amy Tarkanian, a former state party chair whose husband lost to Horsford last cycle.

Innis occasionally mangles the name of his adopted state (he's been here since 2007), supports immigration reform with a pathway to citizenship and was with a group (TeaParty.net) that wants to impeach the president. He’s a former national spokesman for a civil rights group his Dad headed (Congress of Racial Equality) who lambastes Horsford for “insulting” blacks by invoking Rosa Parks and the civil rights movement to sell immigration reform. Innis has a keen understanding of federal issues and has national connections but he submitted a bizarre, serpentine plan to national Republicans on how he would win a seat in Congress.

Innis’ announcement may merely be a footnote in Nevada political history, a dynamic, provocative candidate undone by his lack of money to support him and dearth of Republicans to vote for him. But even should he lose the primary to anointed GOP hopeful Cresent Hardy, the rural assemblyman, or the general to Rep. Steven Horsford, Innis is a fascinating addition to the Nevada political scene, at once out of place on Norman Rockwell Lane but perhaps perfectly situated to pull off an upset if disaster befalls Horsford & Co.

Innis seemed to relish the underdog role on Wednesday, but don’t all underdogs have to do so?

“This is a diverse and grassroots deep bench for this team,” he said. “It is not made up of the Carson City elites or the Princes of Power of this state.”

Now I am not sure that Innis, who has been in Nevada since 2007, could find the state capital, which generally is bereft of elites, on a map or if he could name one powerful prince (besides Prince Harry, perhaps – he railed about the Senate majority leader in his speech).

But he has the patter down, talking Tuesday of a bloated federal government, overregulation and the “Free Money Printing Factory” (the Fed). Innis was equally at home,too, raging about income inequality, telling reporters he supports immigration reform and name-checking Martin Luther King, who would have been 85 on Thursday.

“He didn’t want to fundamentally transform America,” Innis said of King. “He wanted to expand American Exceptionalism and the American Dream to every ghetto and barrio in our country, from Watts to Appalachia, from Harlem to Philadelphia and Mississippi.”

Innis has potential and he understand choreography – that picture set for the media of him with two former GOP chairmen (Clark County’s Dave Gibbs was there, too) and rural county officials was smart. But he has few friends in Nevada and some he has made, such as birther/solipsist Wayne Allyn Root, are not helpful. Sheldon Adelson, however, is a different story, if he goes beyond an initial fundraiser.

Innis will need to raise a lot of outside money because Hardy will lock up in-state support. He has the network, but those federal limits are crimping.

The Democrats showed that they are taking him seriously – or at least taking no chances – when they filed a Federal Election Commission complaint against him. It’s irksome, to be sure; but there are some real questions raised in the document.

Horsford remains a solid bet to win re-election. And Hardy, even though he is not as engaging and dynamic as Innis, may be the favorite in the primary.

But I think Innis, who seems to have the best quality you can have for a race like this – a sense of humor – may make this entertaining, so long as he learns to pronounce the state’s name correctly. However it turns out, with Horsford, Hardy and Innis, this is a picture Norman Rockwell never could have imagined.