The secretary of state is "looking into the matter," spokeswoman Catherine Lu told me. She said the office is "reviewing the PAC filings" of Tony Dane's outfit that are outlined below.

Meanwhile, in an email Thursday morning slugged, "Your (sic) no lawyer," Dane tells me:

You missed the part when I told you that they hired me as a consultant.  All the money they paid me was mine.  You stated who’s money was put into the account, I answered Dane & Associates.

Your question should have been, “How much money did Dane & Associates keep as a consulting fee?”  I wouldn’t of answered the question, but I will tell you I don’t work for free.

Speaker-designate John Hambrick has gone to the dark side, and "only the power of the Force" can bring him back "to the side of good."

So says a "Star Wars"-themed post card (see below) that went out this week against Hambrick, funded by a controversial political operative who acknowledges receiving six figures from "wealthy business people," but would not disclose who is funding the effort.

"I am fed up with Republicans campaigning as conservatives and then going to Carson City and then attacking the conservatives," said Tony Dane, who is funding the campaign through CRC PAC, which he created. The PAC originally reported $45,000 on hand at the end of 2014, but then Dane  amended the report to reflect a $200,000 donation on Dec. 31. All of the money was listed as coming from his company, Dane & Associates.

Dane declined to reveal who he was a conduit for in the effort, saying he doesn't reveal my clients." When I asked why he had to amend the report, he said, "The check came in late."

"I’ve got several clients that are interested in taking out (Assemblyman) Chris Edwards, John Hambrick and several others,"  Dane said, declining to name who else will be targeted. A similar mail piece also has gone out in Edwards' district.

Dane acknowledged that the pieces were a prelude to a recall effort against several Assembly folks -- they could begin as soon as Feb. 12. A PAC to recall Hambrick already has been filed by activist Chuck Muth, who also has been pounding Edwards. Muth declined to answer when I asked whether he is involved in Dane's effort.

If you want to know what's wrong with Nevada's lax disclosure laws, then consider that Dane is able to funnel money from donors into a mail campaign, and their names do not have to be disclosed. I am told the secretary of state's office has been contacted, but I'm not sure what Barbara Cegasvke can do.

UPDATED: Here's one possibility should the new elections policewoman choose to take action.

The question is whether what Dane did violates NRS 294A.112, which prohibits so-called conduit contributions.

Here's what it says:

(a) Make a contribution in the name of another person;

(c) Knowingly assist a person to make a contribution in the name of another person;

(d) Knowingly accept a contribution made by a person in the name of another person; or

2.  As used in this section, “make a contribution in the name of another person” includes, without limitation:

(a) Giving money or an item of value, all or part of which was provided or reimbursed to the contributor by another person, without disclosing the source of the money or item of value to the recipient at the time the contribution is made; and

When gubernatorial candidate Rory Reid set up sham PACs, raising the specter of that law, he got off with a $25,000 fine. But this seems more blatant, more directly a conduit contribution, no? (I suppose Dane could claim the money was his, but it's clear that, to use his words, "wealthy business people" are financing this operation.)

Dane has been involved in many controversial campaigns. He ran for office almost 20 years ago and used David Parks' homosexuality in mail pieces. Dane also has acknowledged in grand jury testimony using misleading tactics to try to bamboozle voters.

So Dane has $200,000 from business folks upset about the governor's proposed tax increase and some Republican lawmakers willing to support it? "A lot more (money)," he boasted.

This is what Gov. Brian Sandoval and any of his GOP legislative allies can expect from now until the end of the session -- and any special sessions. And the 2015 Legislature hasn't even convened yet. 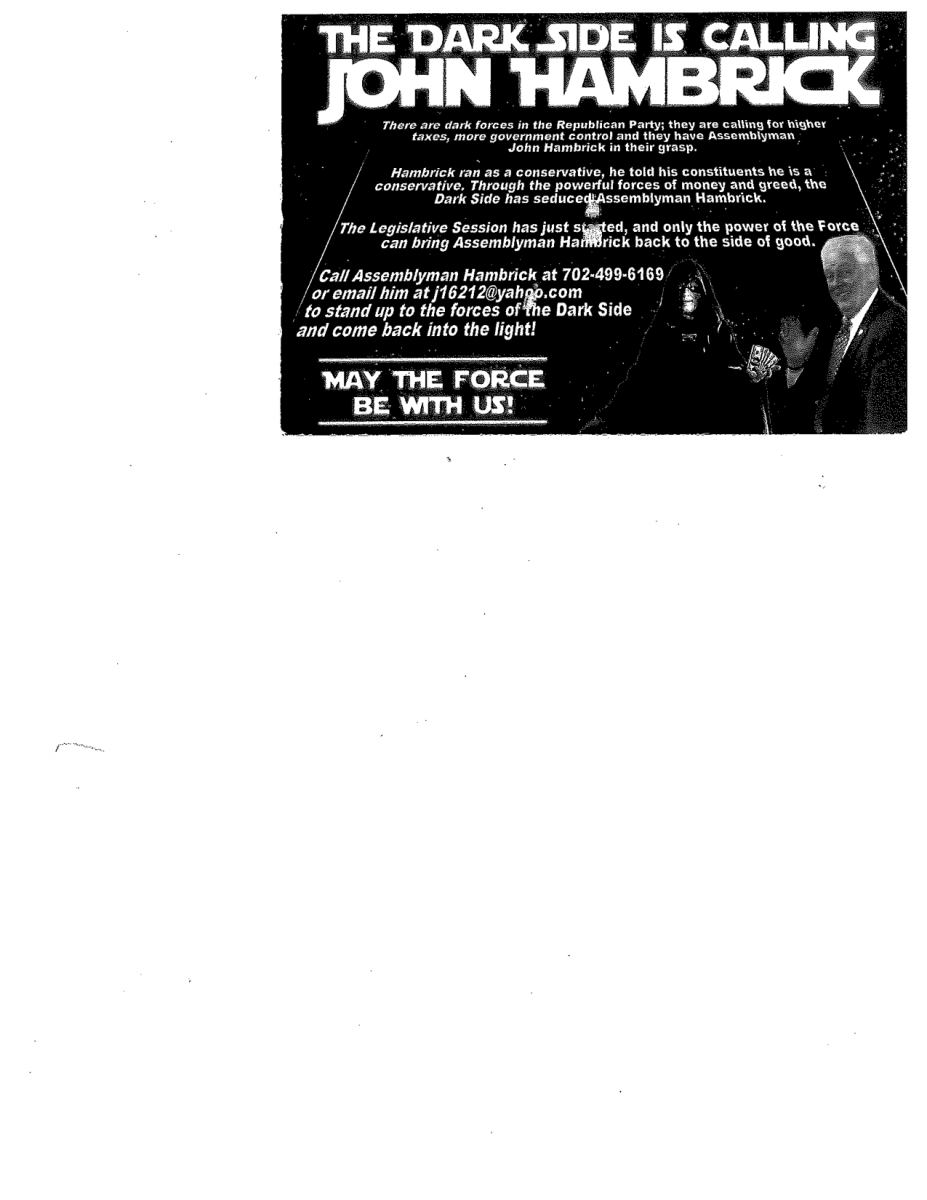