GOP Ass. Caucus: A night and a day in the life of a clown show 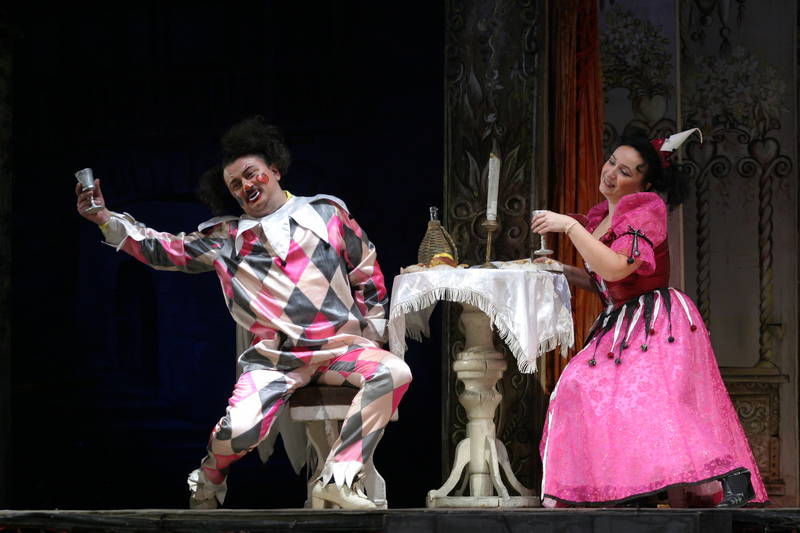 Try to follow along, and try to believe this is actually happening, not the product of a Rod Serling and Jerry Lewis screenplay:

On Wednesday Assembly Speaker-Designate John Hambrick notified Majority Leader-Designate Michele Fiore that he was booting her from taxation, on the same day KNPR covered her $1 million in tax liens.

It has come to my attention that apparently a meeting has been scheduled for December 22nd between a quorum of 17 Democrats and 5 Republicans to vote for a new speaker. I sincerely hope this is not true because it would be in strict disregard for the will of the voters.
I cannot emphasize enough how damaging that action would be to this entire state, and this caucus will not condone that behavior. Anyone who would show such blatant disregard for the will of the voters of their district by joining with the Democrats to select a new speaker will face an immediate recall election as well as face removal from our caucus.
We have been elected to do a job, and it is imperative that we quit playing politics and get to work for the people of Nevada.
Michele

(Although there have been talks between Democrats and Republicans, no Dec. 22 vote had been set.)
The RJ's Sean Whaley, who first reported Fiore's ouster, then put out a couple of tweets from Fiore and her close friend, Victoria Seaman, who had been told she was not going to be the vice-chair of tax. Whaley's story had sourced Ira Hansen, a close ally of Fiore.

@VoteFiore: It appears a few men in our party are not happy that we have Republican woman in key leadership roles in the legislature #lvrj

(Shameless playing of gender card, a technique usually pilloried by conservatives.)
Thursday morning at 7:20 AM, consultant Lisa Mayo-DeRiso put out a release risibly headlined, "Assembly Republicans in Gender War for Leadership."
In part it said,
“It appears a few men in our party are not happy that we have Republican woman in key leadership roles in the legislature, and may look to Democrats for help in unraveling more leadership roles”, said Fiore. “Women make up only 35% of the Nevada Assembly, while they are 50% of our population in Nevada, it seems it is time for women to have a voice and take on leadership roles in Nevada government.”

Of the 15 women in the Assembly, 7 are Republicans, and of those, 5 are Freshman Assembly members. This is the largest influx of Republican women in decades.

Assemblywomen Seaman commented, “To replace the two women elected to the Taxation Committee with two men, sends a very dangerous message to Nevada women voters.  Women pay taxes too in Nevada. They are small business owners and they usually control the household budgets. They deserve to have women in leadership roles looking to impact the laws on taxation in Nevada”.

Seaman's tax quote shows that she is not burdnened by irony, considering her BFF's problems with the federal government.

As I said, I am not making any of this up.

A little more than an hour later, at 8:33 AM,  Hambrick sent out a release under the caucus' aegis with another priceless headline: "Hambrick Reaffirms Leadership, Committee Chairs"
So, just a few hours after he had cashiered Fiore and Seaman, Hambrick reinstated them. Leo Durocher's man in action. And I suppose threats and hectoring do work, n-est-ce-pas?
There's more:
At 12:47 PM, Mayo-DeRiso sent out a release for the poor, oppressed ladies who had survived perhaps the shortest War on Women in history:

Assemblywoman Michele Fiore: "I am here in Carson City with my sleeves rolled up and diligently combing through a six thousand page Nevada State budget. My focus is on the job that I was elected to do. I am grateful for the support from my speaker John Hambrick along with many other Nevadans who support me as Chairwoman of Taxation. I will be addressing the media issues early next week."

Assemblywoman Victoria Seaman: "My role on the Taxation Committee has been restored, and for that I am thankful. I am still committed to making sure that my voice as a Businesswoman in a leadership role in Nevada is heard and that it never be diminished simply because of my gender. I will lead with passion, facts, and solid fiscal conservative solutions representing Nevadans."

I would point out all the errors in those statements, but I do not want to be accused of reigniting a gender conflagration.
But what "media issues" is Fiore, who has refused to engage with any reporters except through statements, talking about?
KSNV's Marvin Clemons asked and received this from Ms. Mayo:
The whole crazy back and forth with the GOP. Here is the timeline:

1.  Ira Hansen voted in GOP Assembly Leader, under pressure steps down.
2.  John Hambrick elected as Rep Assembly leader.
3.  He has Assembly Rep Caucus meeting and appoints Michele Fiore as Taxation Committee Chair, and Victoria Seaman as Vice Chair.
4.  Republican men pitch a fit, Paul Anderson and Pat Hickey, led by their campaign consultant, Nate Emons (sp?) (SIC) and Cory Christensen.
5.  Hambrick lasy (SIC) night at about 5PM, removes Fiore and Seaman and replaces them with two men, Pat Hickey and Derek (someone) from Henderson.
6.  At 10:17 PM last night, the Assemblywoman have me write "War on Women" release and low-and-behold, Fiore and Seaman are now reinstated.
I'm sure more to come....

That is what I meant by "media events".

Should have said "fiasco" perhaps.
My goodness. Where to start?
The "Derek" Mayo refers to is freshman Derek Armstrong. "Low and behold," Ms. Mayo? Really?
Oh loe is me!

The incomparable Ray Hagar followed the story today and extracted gems from Assemblyman John Ellison, who said Fiore claims her business (there are two with liens) was embezzled and caused her tax problems that she has now resolved (Oh?), and Gov. Brian Sandoval who called my reporting of public documents on Fiore's tax liens "double hearsay" before refusing to comment.

This would be embarrassing if it were not....wait, this IS embarrassing.
Folks, these are the leaders of our state.
And unless a coalition of Democrats and Republicans can stick together, this Clown Show Overture will end soon and the Pagliacci Session will begin its 120-run with them in charge.
(Image from yusypovych.com.)