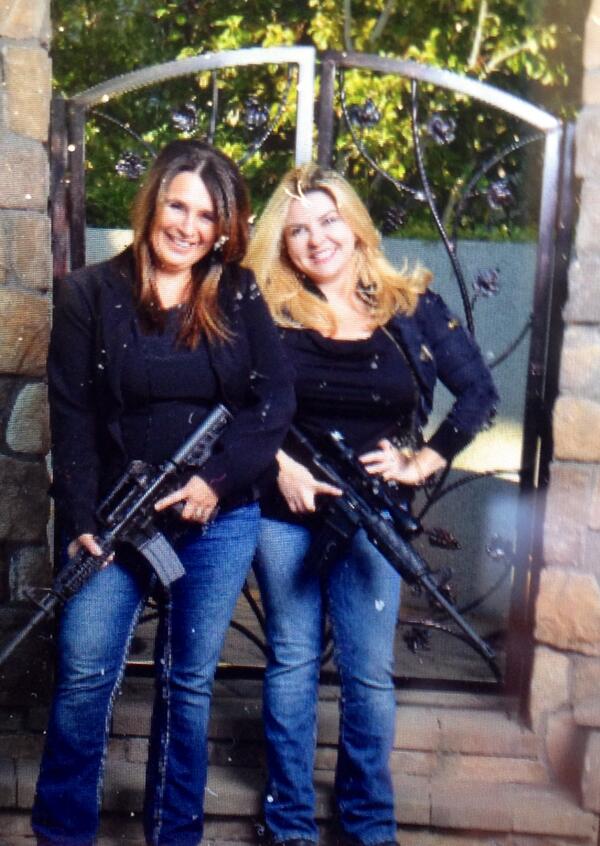 Assemblywoman Michele Fiore, who last week talked about picketers being shot and how she would “hire thugs” if she were running the Cosmopolitan, said last month she carries weapons in gun-free zones, sneered at the governor for making the wrong GOP chairman choice and made an anatomically impossible reference to the chancellor, among other off-color and bizarre remarks.

Fiore, pictured at right with her close friend and Assembly hopeful Victoria Seaman, whom she touted in her speech to the Nevada Republican Assembly, stepped in on Nov. 5 in Reno as a last-minute replacement for her fellow traveler in inane statements, Jim Wheeler. Fiore bragged about breaking gun-free zone laws, sneered at Gov. Brian Sandoval, stood by Wheeler, laughed about using profanity on the Assembly floor and generally was her usual crass self, according to a transcription of her speech I have obtained.

She mocked the governor for trying to get her vote on a controversial DNA bill and for supporting Robert Uithoven for GOP chairman, describing the Las Vegas Sands lobbyist as “Brian’s boy.”

“You showed them that you have the right. Michael McDonald didn’t just win the chairmanship, he slaughtered Brian’s boy, without question. So you showed him. You showed Brian he doesn’t get to dictate to us. And I saw so many of you in Las Vegas I was so happy.”

Fiore, also said Chancellor Dan Klaich has his head “so far where it shouldn’t be.” Lovely, eh?

And the gun-obsessed assemblywoman also pledged, “We’re also going to arm our teachers, K through 12.”

Here are some excerpts from this fine public servant:

►On her upbringing: “And she raised a conservative, Catholic, gun-toting, second amendment, strong-ass woman.”

►On guns: “And I can tell you, as someone that carries a firearm on me like my panties and bra, I do break the law because I generally carry my gun in places where they say is a gun-free zone, because I’m not going to be a victim of a stupid law.”

And: “If that gentlemen right there with the glasses came to me and wanted to hand-to-hand combat with me, if he got close enough in my airspace my (inaudible), I’ll just take him down with a 9-millimeter bullet, and that’s it.”

►On her reproductive organs and Wheeler: “We have to either grow a set of brass ovaries or a set of testicles, whichever you prefer, and if you don’t have a set I’ll borrow my brass ovaries. But we have to do it. Um… so that’s, that’s the guns. So now, let’s talk about… Wheeler. Thank you, Wheeler for having me here, Jim Wheeler. The elephant in the room. And, um, I have to tell you, that Jim Wheeler is a friend of mine, and I stand with him as well.”

And: “I want to smack him on the back of the head for his southern Nevada comments (inaudible). I watched the whole video, all 51 minutes of it, and I still want to smack him on the back of the hat for it. However, again, I love Jim. And guess what? Whether you think he made a mistake or not, I personally do think he made a mistake; I wouldn’t have said that. However, I say… I mean, God forbid if this video ever gets out. What have I not said tonight that the Democrats will not use against me, okay? So… but we see that. Jim Wheeler and I are not politicians; we’re you. We are you. We are real people, hard-working, and we don’t have a filter. So if something comes out wrong, something comes out.”

►On her swearing on the floor:“So we would literally fight. Mr. (Pat) Hickey and I had some heated discussions on the floor, on the chamber floor, okay. But he told me to shut my mouth and I used a Brooklyn 4-letter word.” (Audience laughter). “My peer in front of me, Tyrone Thompson, turned around and said, ‘Michele, this is the chamber. You can’t speak like that,’ and I said, ‘Tyrone, you turn you’re little,’ bah-bah-bah, ‘around and mind your business.’ And he did. Because I don’t play, and I have a gun in the chambers at all times, and (inaudible).” (Audience laughter). “And it’s funny, because I think they purposely put me there because (Steven) Brooks was in front of me.”

►On Klaich: “We have a Chancellor that has his head so far where it shouldn’t be, and I don’t know if you’re his friend, but, you know, he smiles and he’s cordial to me, but he hates my guts, I promise, okay, and I’m not too fond of him either.”

►On the Culinary: “The unions. And… have you guys seen all the ruckus in Las Vegas with the, those poor excuses for human beings in front of Cosmo? Well me and another friend of mine, Victoria Seaman who’s running for AD34 is one of my best friends, we went down there in our boots with our firearms, okay, with handouts thanking the tourists for being there. Okay? So, I always fight against the unions, so unless we increase our numbers, my voice lands on deaf ears.”