Democrats have plan to improve education, but no way to pay for it 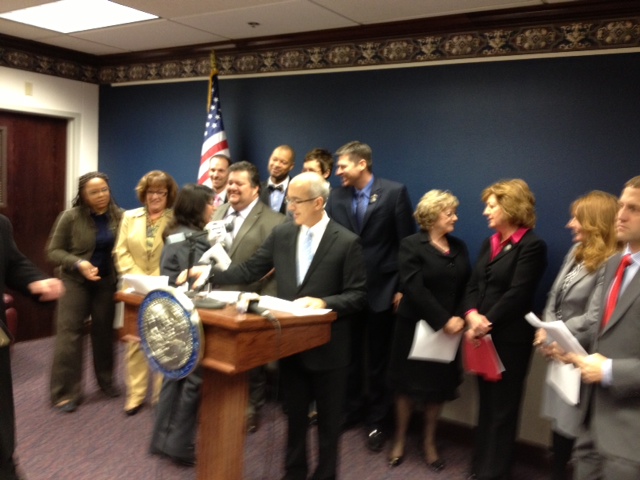 For any good fantasy to work, you have to suspend your disbelief for a time.

So when I heard – again – Monday that legislative Democrats are discussing (they do know how to discuss!) a revenue plan for education, I wanted to believe. Truly. I do.

After all, there they all were , 15 of them arrayed behind state Senate Majority Leader Mo Denis, a few of them rotely reading prepared statements about education enhancements. It was a forced scene, as they all are, with the Democrats earnestly trying to show, as their website says, they are “Building a Better Nevada.”

Are they building a better mousetrap, or one that will snap back on them as the session goes on and they end up doing much discussing and little legislating on arguably the most important issue confronting Nevada.

These events have grown so predictable that even before the media could ask a question, Denis said, “I’m sure the first question you are going to ask is how much does it cost.” (Actually, my first question would have been how they were going to pay for it, but why quibble?)

To their credit, the Democrats on Monday put a price tag – or at least a minimum cost – on what they want to do by enhancing programs for younger students: $310 million.

But while that number may seem huge to some, it’s actually a pittance compared to the need. And everyone in that room knew it.

Indeed, a reasonable estimate of what is really needed over two years to have an impact on English Language Learning students, according to an estimate by UNLV Boyd Professor Sylvia Lazos, is more than $300 million on its own.

And that $310 million increase? It’s about 4 percent of the general fund budget.

State Sen. Debbie Smith, the veteran who chairs the Finance Committee, said after the news conference: “For the first time since I’ve been in the Legislature, we have agreement on where we want to go……just disagreement on when.”

Indeed, Gov. Brian Sandoval, unlike some Republicans and to the consternation of some of his partisan colleagues, talked about all-day kindergarten and ELL funding in his State of the State. His budget, for instance, contains $14 million in funding for ELL programs, which most experts agree is a drop in the bucket.

But Sandoval also has said he will veto any tax package, which makes who was at that news conference in the Legislative Building -- or more importantly, who was not --  more significant. Sixteen Democrats, zero Republicans, several Democratic operatives eager to spin for the electeds and pummel the Republicans, if necessary.

And yet, the math is inexorable. Without a handful of GOP votes, none of this has any chance. And while Republicans are talking about trade-offs for taxes – construction defect reform, for instance – that pathway is pothole-filled. (Like clockwork, the Assembly Republicans put out a news release a few hours after the Democrats’ event, saying it’s not just about money but reform, too. Sigh.)

Despite their willingness to present that $310 baseline number, the Democrats had no interest in talking about how to pay for it. None. (Speaker Marilyn Kirkpatrick did say that careening from session to session and depending on taxes that sunset and then don’t is no way to run a state.)

In response to a question about the teachers’ margins tax, they revealed that they had set a March 5 joint hearing on the plan. Oh? That’s 30 days into the session and 10 days before they must either pass it or punt it to the ballot.

They appear to have no plan at all, yet the Democrats want people to believe that they are moving forward, that this is different than past sessions because the discussions are taking place so early. But talk is not action, motion is not progress.

To be fair, the Democrats are talking, albeit privately, every Thursday evening about tax plans. Key lawmakers, along with LCB fiscal experts, are gathering in the speaker’s office to talk about what is possible and what isn’t.

I got the sense from chatting with Kirkpatrick after the news conference that her plan to remove exemptions from the live entertainment tax could provide some of the funding. Great.

But until they are willing to put forward a comprehensive and lasting tax plan – as opposed to cobbling together strands from a bunch of places – it will be hard to take them seriously. Whether it’s the margins tax or a sales tax on services, they will need to embrace some sort of broad-based tax to raise the kind of money they want AND – the conjunction here is important – reform the tax system.

The Democrats, despite inevitable criticism from the Nevada Policy Research Institute, have a compelling case, which the governor, at least partially, already has bought.

After five years and a billion dollars worth of cuts to education, Sandoval understands that simply reforming the system – and he has proposed many changes  – does no good without money spent on the front end.

The governor says all-day kindergarten needs to be phased in because the urban superintendents say they can’t build the facilities that quickly. Smith says the Democrats want to provide one-shot money to jump-start the construction in the urban areas.

As Denis, who said he could have used ELL funding when he was learning English as a kid, pointed out, the numbers are staggering: 75,000 ELL students in Nevada and 1 in 12 pass the high school proficiency test in English and 1 in 8 in math.

That is not just depressing. It’s tragic.

“It is incredibly hard to learn the fundamentals of academics without understanding the basics of the English language,” Denis said, stating what should be obvious to those making these decisions.

So there’s consensus that money is needed, but the amounts proposed by the governor, by state Senate Minority Leader Michael Roberson, by the Democrats will not put a dent in the program. And think how counterintuitive it is for everyone to agree to end social promotion in the third grade without funding reduced class sizes and ELL studies in the early grades.

Those students will be set up to fail – they are now – and ending their promotion when they can’t read in third grade will be guaranteed by the system. Sheer lunacy.

They don’t need more evidence for what the public wants – a new poll shows people are willing to pay more for a better education system, as surveys always do. But unless the Democrats take their tax discussions from the backroom to a committee room, until they settle on a number and get some Republicans to agree to it, their news conferences will continue to ring hollow and the Nevada they are building will not be better but the same as it always has been.