Deja vu all over again on taxes -- or is it? 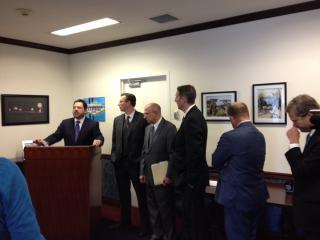 If there’s one thing that the Senate GOP proposal to tax mining means, it is this: The 2013 session just got very interesting.

Interesting enough, as one wag wondered, to be like 2003, which devolved into two special sessions, a governor suing the Legislature and a high court intervention?

Maybe. A pundit can hope.

The reaction in the Legislative Building to the "kill the margins tax/tax mining instead" idea certainly was redolent of 2003. Partisanship reigned as Democrats sniped about Republicans previously being against SJR15, which would take mining taxation out of the Constitution, and pointed out GOP lawmakers had previously said setting tax policy at the ballot was a bad idea.

Of course, both of those statements are true. But why wouldn’t Democrats put out a statement in capital letters that said: “Welcome aboard the tax train, Republicans. We’re glad you, too, recognize the need for more money for education.”

But, no, with partisan operatives on both sides infesting the building and caring more about their members looking superior and the others looking terrible, that was not the message. Great fodder for Fourth Estaters; terrible for the process.

Other observers wondered about the Pearl Harboring approach – not bringing Democrats in at the beginning and even keeping many Republicans in the dark.  They did not want their thunder stolen. Yet, these folks surely infuriated too many of the brittle egos in the building and surely will help the mining lobbying phalanx play divide and conquer.

But Senate Minority Leader Mike Roberson and his five comrades in taxation – less than one-tenth of the Legislature! -- are The Dirty Half-Dozen, apparently sent on a suicide mission to Carson City to kill the job-destroying margins tax, get Democrats to buy into an alternative, position themselves for a 2014 takeover, overcome opposition from the potent mining lobby and from across the courtyard and get voters to buy it. Lee Marvin and Charles Bronson had an easy task by comparison.

The news conference announcing the plan was highly entertaining. As the Dirty Half-Dozen made the case that education was underfunded and that the mining industry needed to contribute because it was barely taxed, they also took pains to say they were not criticizing the governor’s budget – as Brian Sandoval spokeswoman Mary Sarah-Kinner looked on. Too delicious.

They praised Sandoval for putting an additional $135 million into education, even though about three-quarters of that is in required inflation and roll-up costs. Sen. Ben Kieckhefer said they simply wanted to “accelerate” the governor’s plan, not that they were saying he wasn’t spending enough.

Oh? “We are proposing that we give voters a choice about how we generate more revenue to fund education in our state,” Roberson said in a news release, thereby contradicting Kieckhefer’s tortured spin.

I give the Dirty Half-Dozen credit for seeing the light on mining taxation, and I appreciate the political boxing in of Democrats. But own it, guys!

How sad to see State Sen. Greg Brower telling the Sun right before the news conference that he might consider supporting SJR15  and then said during the event that he was committed to vote for it. It was comical to hear Brower, Sens. Joe Hardy and Scott Hammond explain they had flip-flopped on the mining resolution from last session because their constituents told them they wanted mining to pay more, and they also saw the light on the legal issues.

Really, gentlemen? You can do better.

Maybe the truth: “We hate the margins tax. The mining protections are ridiculous. This is a great synergy.”

And then there were their "friends." One Republican was fulminating that this was about placating Monte Miller, the prominent businessman who unsuccessfully tried to tax mining. Another, Assemblyman Ira Hansen, said this was about Republicans stabbing other Republicans in the back.

There are serious legal issues at play, too. Lawmakers have an opinion that says SJR15 needs only a majority vote and will not impair their ability to tax mining, as the industry has risibly argued. But what to make of Article 19, Section 2 of the Constitution, and what it says about the latitude, poison pill to the margins tax that the Dirty Half-Dozen hopes to achieve?

So it seems as if the Legislature can, as Roberson et. al. want to do, propose an alternative, but what does “been approved by the Governor” imply? What if he doesn’t “approve” it? Is that considered a veto? Can the Gang of 63 override?

Very unclear, even though Roberson seems to think they can override if the governor does not sign. Unlike him, I’m not lawyer, but hard to see it that way based on that language.

And whither gaming? The industry has previously said it would stand on the sidelines, but one casino company lobbyist told me his client is worried that the Democrats might now target gaming. Right.

The Nevada Resort Association released a statement that showed the casinos know that they, too, could be targeted: "As in the past the gaming industry has concerns about any industry-specific tax.  Revenues from gaming taxes currently comprise 46 percent of the state's general fund.  We believe that tax reform policy should focus on solutions that are broad based, stable, and sustainable given the fragile recovery we are experiencing."

Sorry, Dirty Half-Dozen. The gamers are not willing to accompany you on your impossible mission.

What a nightmare this could devolve into after the Dirty Half-Dozen actually put a reasonable idea on the table. These Republicans also were careful to say they believed in the tax reform debate, so long as it is – wait for it – revenue-neutral.

So the tax reform has to be revenue-neutral, but taxing mining doesn’t have to be?

“Passing SJR15 is the first step toward real tax reform,” Roberson said at one point. Of course that’s not so. You can do tax reform, whether it’s through a margins tax or sales tax on services or another vehicle, without regard to taxing mining.

Yes, the mining industry has for too long – you know, since statehood – enjoyed an unreasonable and ridiculous constitutional taxation prophylactic. But reforming the tax structure means broadening it, which means including other payers.

The good news is the consensus seems to be building, especially after last week’s hearing on class-size reduction in both parties that more money is needed for education. Even the deadly, marathon hearing Tuesday on the stilllborn margins tax – it will go on the ballot instead – can’t stop the momentum for the discussion to continue.

But they have miles to go before they tax. And with all of the usual forces arrayed against them and Democrats and Republicans historically putting self-interest above cooperation, my flashbacks to the 2003 sessions are returning.

Exciting, yes, but equally depressing, that was. And long, too, finally ending well past Independence Day.

Roberson’s final words of that news conference? “This has to be bipartisan.” Indeed it does.

See you in July, when the third special session begins….