Anderson has message for Dems: Come at me, bro

Conventional wisdom has it that the Democrats are favorites to recapture the Assembly, which they shockingly lost in 2014 after holding a 27-15 edge and hemorraghing 10 seats.

Beneficiaries of the red wave such as Shelly Shelton, John Moore and Victoria Seaman (fleeing to a state Senate race demise) will be erased, the CW goes. An additional two more seats in a Democratic year and control switches.

Not so fast, Assembly Majority Leader Paul Anderson is telling donors as he raises money for third-party efforts and sends a message with a pair of events of his own.

These contests can be decided by the quality of candidates, campaigns and ground games, especially in small political subdivisions. I still think the CW is correct: Anderson is an underdog to remain in control.

But some major special interests (hello, Las Vegas Boulevard South!) pledged to help protect some of Anderson's members after they went out on a limb on the tax deal. That could matter.

And check out the roster he has assembled for events North and South. A lot of GOP staples, but plenty of lobbyists who play both sides. We will see some of those names on Democratic events, too.

This is going to be a fascinating matrix to watch as Democrats hope a rising Hillary tide will provide a blue wave in '16 as Anderson already is erecting sandbags stuffed with cash. 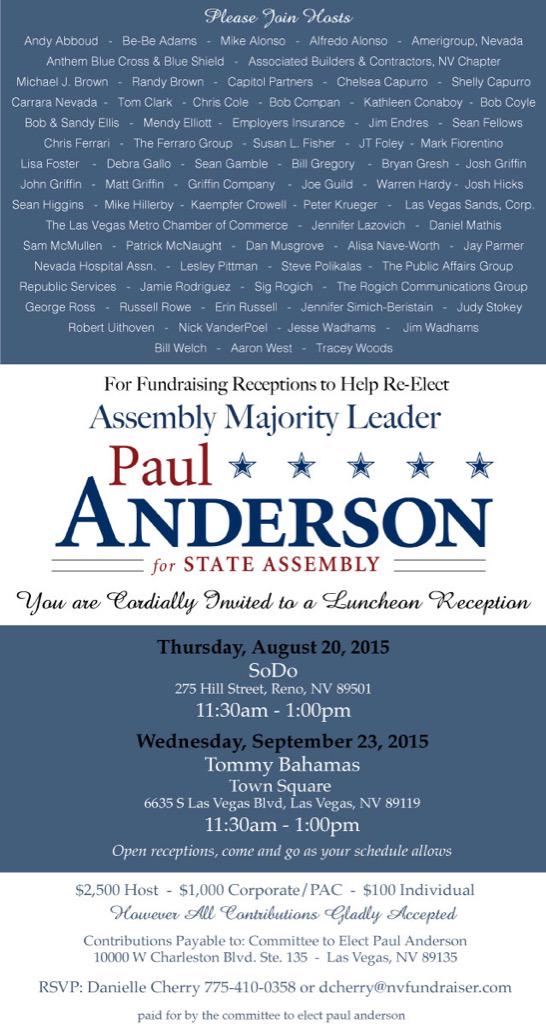